The media has been attacking Rep. Devin Nunes (R-CA) over his decision to inform Donald Trump about evidence that backs up Trump’s allegations that Trump Tower was wiretapped by Barack Obama. But not everyone is taking that bias lying down; Trey Gowdy appeared on CBS’ “Face the Nation” and he shut down anchor John Dickerson’s bias quick[1]. 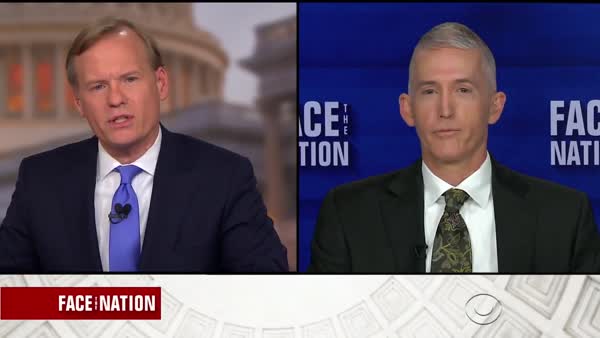 “I want to start with this question of unmasking that Chairman Nunes brought out,” Dickerson said. “Has he shown you any of what caused him to suggest that Obama officials are doing surveillance, captured some Trump campaign associates and then unmasked them in the process of investigating?”

“He has not shown it to me, John,” Gowdy responded. “I am vaguely familiar with it, no more, no less familiar with it than Adam Schiff is. I just tell you this. My understanding is Chairman Nunes briefed the Commander-in-Chief on matters unrelated to the Russian investigation, so if that is big deal in Washington, then we have sunk to a new low.”

But the fight was only getting started. “Well, I guess Congressman Schiff would say but the president is the one that is a part of this investigation being done by the committee, so the chairman shouldn’t be talking to him,” Dickerson argued. “Well, then, let me repeat what I said,” Gowdy interrupted. “That the chairman of House Intel briefed the commander in chief that has nothing to do with the Russian investigation. So if the commander in chief cannot be briefed by the chairperson of the House Intel Committee on a matter that has nothing to do with the FBI investigation, then I don’t know what they can talk about, John. He is the Commander-in-Chief!”

“So if this is an issue outside of the one they are investigating at the moment in the committee and that you are investigating, should it then be taken out of this investigation?” Dickerson asked. “Have a separate investigation on both the issues that Chairman Nunes has discovered this week and then also the one you are quite concerned about, which is the leaks that have been in the paper, some of them potentially illegal. Get that out of this question of Russia to keep things from getting mixed the way they appear to have?”

“Well, they are separate, and I heard my friend from California mention that independent commission, thank goodness we have one, it is called the FBI,” Gowdy answered. “The FBI has counterintelligence jurisdiction and they have criminal jurisdiction, and what we learned on Monday, and it is about the only thing we learned on Monday was that the FBI’s investigating both. They are the world’s premiere law enforcement agency, they are independent, you have women and men at the Department of Justice who have dedicated their careers to the blind pursuit of justice. It doesn’t get any more independent than that. So we have an independent entity investigating counter-intelligence and allegations of potential criminality, let Congress do its job which is provide oversight over the intelligence community.”

Dickerson kept pushing Gowdy about it and Gowdy didn’t back down.

“It is just one more reason to bring director [James] Comey and [Admiral Mike] Rogers back on Tuesday,” Gowdy said. “It’s incredibly important. Adam is right, that Adam is right that the incidental collection of U.S. persons happens. What I wish some of my friends over on the other side would be a little more outraged about is the political use of that unmasking. So I understand we collect U.S. citizens but we don’t read about those U.S. citizens on the first page of the New York Times and the Washington Post. That admission to threatening the surveillance programs is also a felony. So I hope that we learn more about that on Tuesday.”

“All of this is important, John,” he continued. “Every bit of it. Russia is not our friend. They attacked our Democracy. I want to investigate every fact that is related there to, but the felonious dissemination of classified information is the only thing we know for sure is a crime, and it would be nice if we showed the same level of interest in that.”

Dickerson then tried to claim that the committee was “unhealthy” and rife with passive-aggressive posturing.

“I actually think Chairman Nunes and ranking member Schiff are both good men and I think they get along fine,” Gowdy responded, shutting down Dickerson’s argument right.

“I think what you learned Monday, because I heard the witnesses almost 100 times, John, say they could not answer the question in that setting and I want you and your viewers to ask themselves, why are we satisfied with every other facet of culture having serious investigations done confidentially, the grand jury, judges meeting with attorneys, police officers interviewing suspects, all of that is done confidentially, and we are more than satisfied with those investigations, and yet when it comes to Congress, we think we ought to have a public hearing. 100 times those two witnesses said they could not answer the question in that setting. Why in the hell would we go back to that setting if the witnesses can’t answer the questions?”