Wow. More blatant news manipulation by ABC.[1] Iraqi interpreter Hameed Darweesh was released yesterday after being detained per President Trump’s executive order freezing the admission of refugees. He was at JFK Airport in New York. The same place where the taxi union is now refusing to pick up people… why? Because they are mostly Muslim and are offended. Hameed seems like a patriot and a very nice man, but vetting is being done on an individual basis and it is a national security issue. All countries do this… many with delays of hours and sometimes a full day.

Darweesh was interviewed by ABC and other media as he was released. There was cheering. He said America is the greatest nation. When asked what he thought of Donald Trump, he said he liked him, but he didn’t know. The last part was added after a women (Rep. Nydia Velazquez) looked at him disapprovingly. The media was shocked and when ABC ran the clip, they deliberately cut that part out. So typical. Velazquez is a stone cold Marxist by the way. 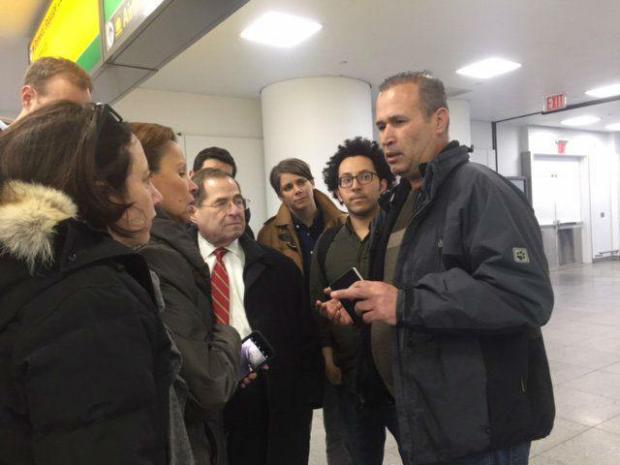 When being interviewed by the media, Darweesh said “America is the greatest nation. The greatest people in the world.”

Asked his opinion of President Trump, he said: “I like him, but I don’t know. This is a policy, I don’t know.”

Leftist agitator Rep. Nydia Velazquez had this hilarious reaction which is going viral across the internet:

If you were following ABC News, you’d have missed the comments because they cut their clip of him speaking for before he said it:

Hameed Darweesh speaks after being released from detention at JFK airport in wake of immigration order: "America is the land of freedom." pic.twitter.com/2NfkWSEhxN[6]

People are regularly held up by immigration officials across the globe. Getting into ultra-liberal Canada can take an entire day if you’re flagged for whatever reason. The hysteria the media’s trying to create because President Trump moved to protect America from terrorists is nothing but unadulterated fake news.

Hameed Khalid Darweesh[16], who is an Iraqi man who put his life on the line as an interpreter for the U.S. military, praised America as the “land of freedom” after being released from airport detention. He was not looking to be a radical and he did not hate those that detained him. Donald Trump’s executive order on immigration and visas had resulted in the detainment on American soil of Darweesh, 53, and another Iraqi man, Haider Sameer Abdulkhaleq Alshawi. As far as I know, Alshawi is still being detained.

A federal judge granted an emergency stay of Trump’s executive order on the evening of January 28. According to ABC News, “The ruling does not appear to overturn administration policy, but does appear to apply to all of those people currently detained at airports across the country who were facing imminent deportation.” Customs agents are actively defying that judge’s ruling by the way and are standing with President Trump on this.

According to CNN, Darweesh was released due to exemptions in Trump’s order “that allow the State and Homeland Security departments to admit individuals into the US on a case-by-case base for certain reasons, including when the person is already in transit and it would cause undue hardship and would not pose a threat to the security of the US.” ABC News reported that the men are not technically refugees under Trump’s executive order. Nonetheless, we have this circus concerning these men with the media egging it on. ABC is creating fake news to smear the President for trying to protect the country from terrorists.