This is simply insane.[1] It’s truly low even for the media. CNBC asked their Facebook followers if they agreed with a statement made by ISIS. “Do you agree with ISIS?” asked the post, which linked to a story with the headline: “Islamic State says US ‘being run by an idiot.'” So, let me get this straight… you want your audience to agree with psychotic butchers because you don’t like President Trump and you think he’s a moron. If you are who you hang with, doesn’t that make CNBC savage murdering, conquering, rapists? Hmmm. Interesting line of logic.

“You [the U.S.] are bankrupt and the signs of your demise are evident to every eye,” said ISIS spokesman Abi al-Hassan al-Muhajer in a new recording. “There is no more evidence than [that] you being run by an idiot who does not know what Syria or Iraq or Islam is.” Sounds like fighting words to me and that they need to have their collective ass kicked. CNBC on the other hand, borders on anti-American to say the least. They certainly aren’t what I would call real journalists or even remotely patriotic. 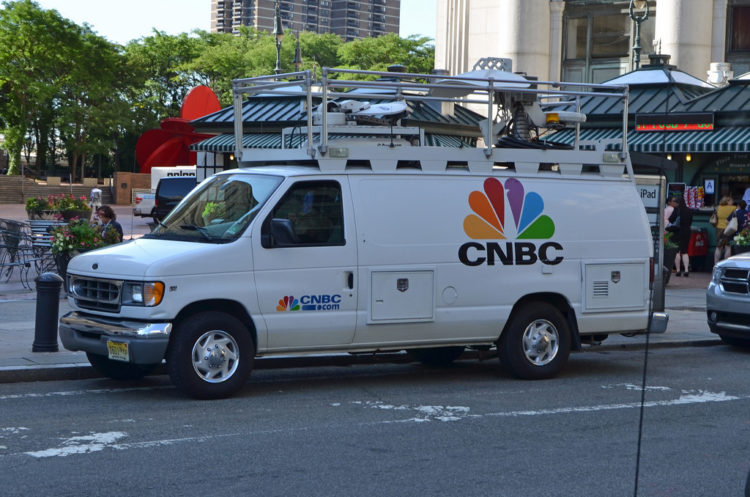 From The Federalist Papers Project[3]:

The left’s Trump Derangement Syndrome has hit a shocking new low as CNBC reportedly asked if Facebook users sided with ISIS in regard to a statement a spokesman for the terrorist group just made about President Trump.

A CNBC Facebook post[4] (that has since been edited) asked viewers, according to the Washington Free Beacon: “Do you agree with ISIS?” and linked to a story titled “Islamic State says US ‘being run by an idiot.’”

“You [the U.S.] are bankrupt and the signs of your demise are evident to every eye,” ISIS spokesman[5] Abi al-Hassan al-Muhajer said in a recent recording. “There is no more evidence than [that] you being run by an idiot who does not know what Syria or Iraq or Islam is.”

Most of the comments in response to the Facebook post were not in agreement with their premise. “Our ‘idiot…’ is going to wipe you off the face of the earth,” reads the top comment, left by a supporter of President Donald Trump. And I hope that Trump does exactly that. Bombs ISIS right to hell… literally.

Even those who don’t support Trump, didn’t want anything to do with this crap: “Just pointing out the obvious does not make them any smarter,” one Facebook user wrote. The left is totally unhinged over Donald Trump. They need professional help. I just don’t think there are enough qualified psychiatrists to go around for these guys. This is stupidity on steroids and it shows why CNBC is irrelevant and a joke. But hey… they are one with ISIS. 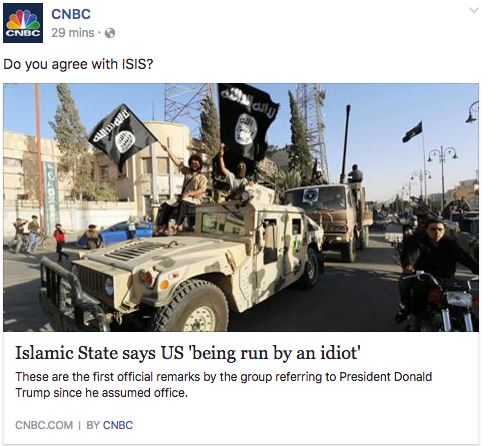