White CNN anchor Kate Bolduan took it upon herself to attack Sheriff David Clarke (a Democrat, by the way) simply because he’s taken a position with the Donald Trump administration. Let that sink in for a moment.

I think I’ll quote CNN’s own Van Jones in calling this a “white-lash” aimed at a man of color who simply wants to help his country. 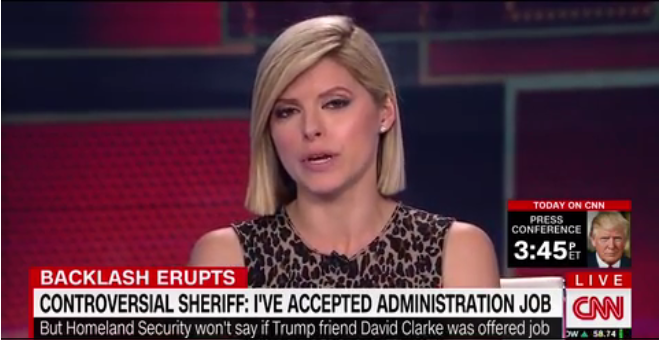 In her transparent attempt to discredit Clarke, she aired several clips of him (wait for it, it’s horrible) voicing his opinion. I know, frightening.

From the Daily Caller[2]:

In one clip, Clarke said that “so many of the actions of the Occupy Movement and Black Lives Matter transcends peaceful protest and violates the rule of law we rely on. I call it ‘anarchy.’”

In another he’s seen standing up to notoriously biased Don Lemon to the point that Lemon tells his crew to cut the feed and go to commercial.

“I’m tired of all these crocodile tears about ‘the kids, the poor kids coming.’ We’re not talking about that,” Clarke said in yet another clip. “We’re talking about able-bodied grown men, fighting age, that should be back in Syria, back in the middle east, fighting for their country, coming over to the United States to spread Jihad.”

Clarke is an amazing man who has his head on straight and these media hacks can’t stand that a black man can think for himself. This is why they feel the need to attack him; they believe they have a monopoly on the African American vote and anything that proves them wrong is a threat.

Expect the next 4 years to be nothing but character assassination and pathetic attempts at making any and everyone associated with Trump’s administration seem like bad people, despite any evidence otherwise.