It’s no secret that the media is in the tank for Hillary Clinton. But outright lying? You would think they would try to at least hide the manipulation, but evidently, they’re just that brazen. Case in point? CNN, which has just been caught blatantly lying about Donald Trump.

The article reported that Trump was encouraging his supporters to vote more than once. It was titled “Trump, skeptical of mail-in balloting, encourages voting more than once if necessary.” They claimed to have quoted Trump as well.

If you go to university center, they’ll give you a new ballot, they’ll void your old ballot, in some places they do that four or five times, so by tomorrow, almost everyone will have their new ballots in. 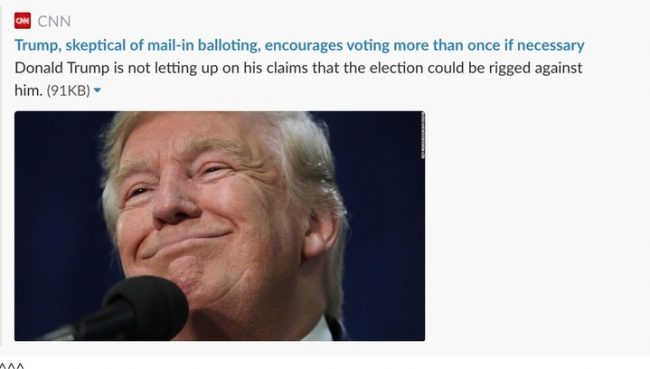 Mediaite caught the deception, though, and wasted no time in calling CNN out for it. This is what Trump actually said, for example.

CNN eventually went back and changed the title, which became: “Trump stokes skepticism of Colorado voting system.” But Mediaite pointed out that CNN was trying to hide their editing.

“As of publication, the piece shows it was updated at 8:27 PM ET, but makes no mention of the actual changes that were made,” Mediaite said. “There exists no editor’s note or acknowledgement of the entire premise of the piece being completely changed, revealing a stealth edit.”

Finally, over an hour later, CNN owned up, writing: “[T]his story and headline have been corrected to accurately reflect Donald Trump’s statement about mail-in balloting in Colorado.”

Newsbusters pointed out that, ironically, CNN senior media correspondent Brian Stelter wrote an essay warning people to be wary of sharing articles from fake news sites. Yet he didn’t seem to have any problem whatsoever with CNN’s fraudulent information. Maybe he should look into that before worrying so much about other “fake” news sites.