And the battle between[1] CNN’s Jim Acosta and White House Press Secretary Sean Spicer continues. This time, Acosta was vociferously heckling Spicer for not having cameras on at a press briefing. I’m of the opinion that President Trump and Spicer are doing that just to tick the media off and it’s working. Spicer repeatedly ignored Acosta’s rude demands. He announced that he wanted the attention to be fully on the President later in the day and didn’t feel massive media buzz over a press briefing was appropriate at that time. Acosta didn’t like that answer at all.

CNN even hired a sketch artist because they couldn’t get video. Acosta demanded to know why the cameras were turned off for the briefing and he got all pit-bullish on Spicer. Spicer did not call on Acosta again during the briefing and I don’t blame him. But that didn’t stop Acosta from interrupting constantly during other questions by reporters. He really should be banned from the briefings. He has no journalistic ethics or dignity whatsoever. 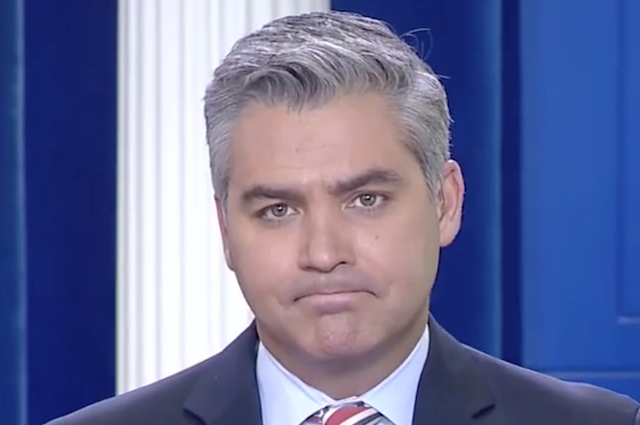 Spicer began the press briefing announcing that he would allow still cameras.

Several camera shutters clicked, prompting him to joke about “putting sketch artists out of business now,” after CNN hired[4] a sketch artist last week to outline an off-camera briefing.

Acosta interrupted the press briefing, asking Spicer why he refused to turn on the cameras during the briefing.

“I’m sorry that you have to do this,” Spicer said, as Acosta repeatedly asked why the cameras were off earlier in the briefing.

“Why not turn the cameras on Sean? They’re in the room, the lights are on,” Acosta continued.

Later, Acosta went on CNN whining about his treatment in the press briefing, noting that Spicer refused to take a question from him. Oh, freaking boo hoo! “It sounds like Sean Spicer ignored your questions,” the anchor said, pointing out the “heated exchanges” with Spicer. “Sean Spicer has refused to take questions from CNN for weeks now,” Acosta said, although he clarified that “he may have taken a question here or there, over the last couple of weeks.” Spicer has taken questions from CNN… frequently, I might add. This is more whinging from a biased media hack. “We’ve largely been just blackballed during these briefings,” he asserted. “We’re just not getting questions to the White House press secretary … that would not have happened in previous administrations.” Tell you what, Jim… I think they should actually blackball you and then you’ll have something real to whine about.

Spicer said Acosta’s assertion that CNN had been “blackballed” was “truly fake news,” telling the Washington Post that he had called on CNN’s Athena Jones last week and had spoken with CNN reporter Joe Johns on Monday morning. Again, that is correct. Later that afternoon, when President Trump and Indian Prime Minister Narendra Modi issued a joint statement, Acosta joined other reporters in the Rose Garden. But when he went to sit in his assigned seat, his placard was gone and some of CNN’s equipment had been moved. Serves him right. He then spoke with White House press aides, returned with a CNN placard and sat in a seat in the front row that was left empty. After the President’s statement, Acosta shouted questions at Trump on the healthcare bill and he was ignored and dismissed by the President. Good for Trump. That’s exactly what this asshat deserves.