Ever since Donald Trump branded CNN as “fake news,” the network has been at war with the Trump administration. But unfortunately for CNN, they’ve repeatedly stepped in it over the past month, having to retract a story and fire reporters. And now they’ve messed up again — only this time, their victim was Abraham Lincoln[1]. 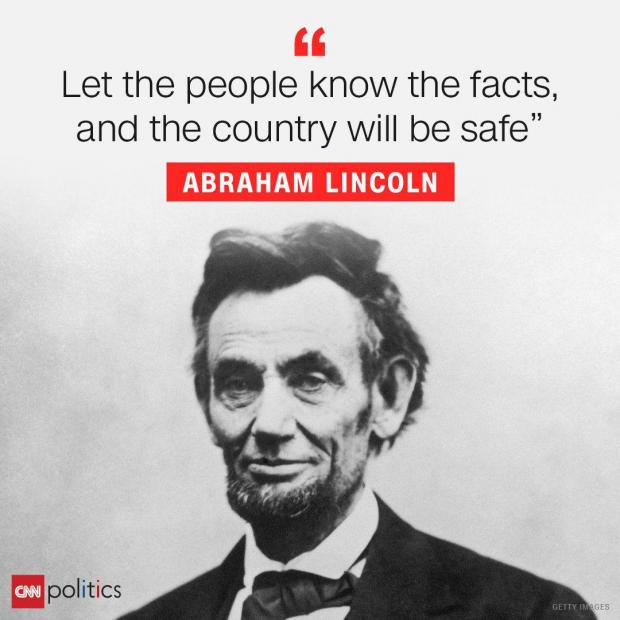 CNN has been trying desperately to maintain an image of journalistic integrity, despite their constant missteps recently. On Independence Day, CNN began tweeting out quotes that they claimed were from our nation’s leaders, like Benjamin Franklin and Abraham Lincoln. The only problem is that they couldn’t seem to get those quotes right.

According to CNN, the quote “Let the people know the facts, and the country will be safe,” was said by Abraham Lincoln.

Celebrate America and its freedoms this Independence Day. pic.twitter.com/x4XAdWEOl2[4]

Except scholars don’t believe that Lincoln ever said such a thing — and at absolute best, the wording was still incorrect. One newspaper quotes Lincoln as saying, “Let the people know the truth, and the country will be safe.” The phrasing may seem similar, but “truth” and “facts” are not interchangeable.

Another source has Lincoln saying something quite different from the CNN quote. In an 1863 edition of the “Boston Daily Journal,” the Lincoln quote reads, “Let the people know the facts, let them see the danger; but let every effort be made to allay public fears, to inspire the masses with confidence and hope, and, above all, to frown down every attempt to create panic.”

Only one person claimed to hear Lincoln say this, though. In both instances, the quote CNN used is poorly sourced.

While the quote is real in this instance, Benjamin Franklin didn’t say it.

CNN also left out the entire quote, which gives it context. The quote reads, “Without freedom of thought, there can be no such thing as wisdom; and no such thing as publick liberty, without freedom of speech: Which is the right of every man, as far as by it he does not hurt and control the right of another; and this is the only check which it ought to suffer, the only bounds which it ought to know.”

If CNN can’t get such basic research right, then can they really complain about being called fake news?