Mainstream Media posts FAKE NEWS more than ever, here’s why!

Yesterday, I wrote on the Secret Service calling bullsh*t on The Atlantic. See here.[1] Steve Clemons from The Atlantic stepped in it big time and was tweeting on Thursday claiming that Secret Service personnel were forced to resign in the White House and were escorted out of the Old Eisenhower Executive Office Building. Clemons wanted to get a breaking story out too fast and did not check his facts. He got bit for it and wound up apologizing. The Secret Service wasn’t bashful about calling him out for it either… good for them. It’s a prime example of fake news.

But that’s far from a unique bit of fake news[2] from the media these days. The biggest purveyors I have seen are CNN and the Washington Post who have let their hatred for the Commander-in-Chief run wild. Their headlines many times bear little resemblance to reality and are skewed to smear Trump. Seriously… just take a bit and check out their headlines versus Fox News or any conservative blogger and you will see what I mean. T. Becket Adams had some fun by going out there and finding fake news that the biased media had to come back and issue lengthy corrections and apologies for. Heh. 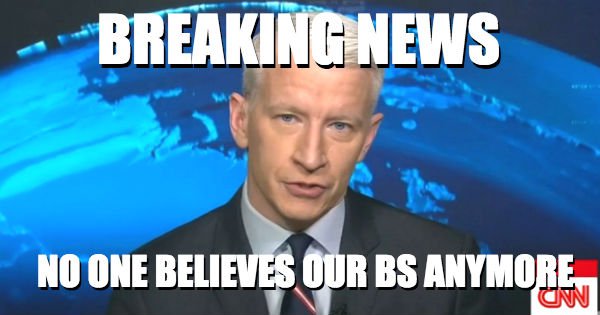 Thinking the nimrods in traditional media have yet to figure out they all but elected Trump. First they propped him up with a ton of free coverage (for clicks and reads no doubt), obviously planning to tear him apart during the election.

Although by then Americans were onto their nonsense.

Now that we have President Trump, the media can’t seem to stop itself from reporting incorrectly and then having to correct … err … update stories.

Oh karma, you cheeky monkey you.

When you get more wrong about a story than you get right? Yup, that makes for a LOOOOOONG (and hilarious) correction.

Fair point, but honestly it only got worse after he received the nod. The media more than ever proved themselves a propaganda wing for the Democrats.

And they’re still paying for it.

I think the media is still in utter shock that Hillary lost and are doing all they can to discredit Trump. And they are certainly not above lying or using propaganda to do so. There are some good guys still left in the mainstream media, although sometimes they step out of line too… I like Anderson Cooper and Jake Tapper most of the time. But even they don’t get that the media played a huge roll in getting Trump elected. It’s like they just can’t stop themselves. It’s funny and pathetic all at once.

The big boys seem to run stories now that aren’t sourced (sometimes at all), or that come from very dubious sources. I’ve seen a number of bloggers do much better journalism than the mainstream media these days. Journalism 101 teaches you to have more than one source and to verify up the kazoo. But they’ve thrown that out the window for gotcha moments and salacious tweets, with more emphasis on getting them out fast than getting them out right. SMH.

@derekahunter[6] You mean the story might be full of shit? Really?

Is this just another BS story by WaPo? They start it citing an unarmed source, others cite WaPo and 10hrs later we find its BS