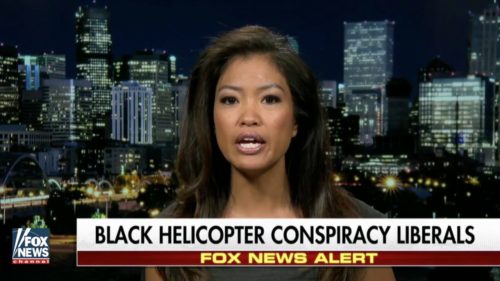 The always brilliant Michelle Malkin[2] spoke with Sean Hannity on Fox News Friday and simply hammered Rachel Maddow on her predilection for Trump conspiracy theories. She was brutally honest, saying, “I think that Rachel Maddow must be Reynolds Wrap’s number one customer because the tin foil hat consumption is through the roof.”

Malkin continued, characterizing Maddow’s aspirations this way, “Her number one goal is to bash and obstruct the Trump administration — it has been since day one. And they’re going to beat that dead horse until they can’t do it anymore.”

Describing the Leftist media conglomerate, she said, “It is an illusion factory, it is an echo chamber.”

Her conclusion? “People are sick and tired of it…there is so much real news that is going on.”

Indeed Ms. Malkin, Rachel Maddow is the poster child for ‘unhinged.’ She rabidly pursues her anti-Trump agenda, making no pretense at being unbiased. She repeats allegations and makes insinuations, hoping that it will be enough to get people thinking there’s something to those Russian collusion accusations. To date, there is not a shred of evidence to suggest or prove that Trump colluded in any way. As Trump himself tweeted earlier, this is, pure and simple, a witch hunt. And the Left will not rest until they’ve gotten their witch.

President Trump is fulfilling his campaign promises and enacting the agenda the American people elected him to carry out. He needs every bit of support he can get from Americans because he is under assault from the media, his own party, the Democrats and the bitter never Trumpers.

“Journalists” like Maddow are out for blood. As is every other Liberal media outlet. There’s no excuse for the lack of journalistic integrity we see daily from the Left wing media. They are nothing more than political shills for the Democrats and it is time they answered for it. It is also time for Americans to be discerning in what media we view and believe. Because Rachel Maddow and her ilk are simply fake news.