When I saw this yesterday[1], I laughed… I just could not help myself. It’s the first and probably the last time that I will ever agree with Russian Foreign Minister Sergei Lavrov. He burned NBC’s Andrea Mitchell yesterday big time and it was simply glorious. She is going to need Aloe for that one. When Lavrov was sitting down with T-Rex to discuss the Syrian standoff, Mitchell started screaming questions at Tillerson. She’s done this before with the Ukrainian Prime Minister and with President Trump as well. Lavrov didn’t miss a beat: “Who was bringing you up? Who has given you your manners?” Perfectly delivered with just the right amount of sneer afterwards. Heh.

How does it feel Andrea to be humiliated on the world stage? Knowing that sea hag, she probably didn’t have enough sense to be embarrassed. Perhaps she has forgotten how the Russians tend to handle reporters who get out of line… many ‘accidentally’ fall from roof tops; others die of a heart attack from poison; and some commit suicide by being shot in the back of the head. She should watch her step there… the Russians don’t have a sense of humor we are aware of, especially right now. Mitchell is a massive pain in the ass and a disgrace to America. 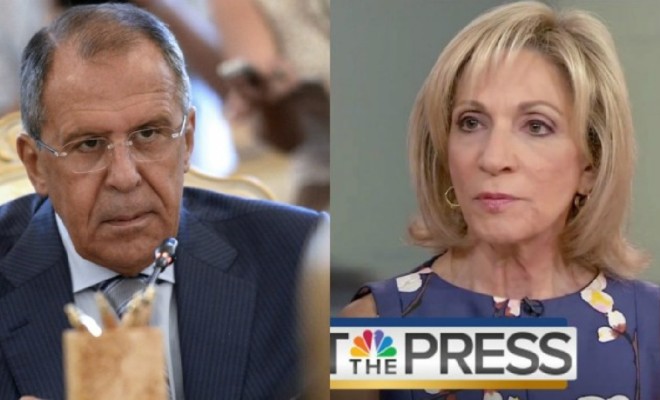 NBC’s Andrea Mitchell[3] received a public rebuke from Russian Foreign Minister Sergey Lavrov on Wednesday as she learned her style of shouting questions was not well received in the Kremlin.

Mitchell was among the many reporters at a public portion of Secretary of State Rex Tillerson’s visit to Moscow. As Tillerson and Lavrov entered, she called out her question regardless of the fact Lavrov was talking.

“Mr. Secretary, the Russians don’t believe the intelligence. How confident are you, Mr. Secretary …” Mitchell began to ask.

Lavrov cut her off short.

“Who was bringing you up[4]? Who was giving you your manners?” Lavrov asked.

How long until @MSNBC[5] makes a commercial out of Sergei Lavrov telling @mitchellreports[6] she has bad manners? [VIDEO]
https://t.co/YTrHUn6C66[7] pic.twitter.com/4E1qRDFvZg[8]

Twitter shredded Andrea Mitchell over this and I love it. Few have it coming more than this cloven hooved harpie. ABC got footage of the dressing down and tweeted it. Now, that’s funny. Mitchell reports on foreign affairs… kind of. Most of her reporting is skewed, fake news that is just trashy. She attempted to address Tillerson, presumably about the recent Syrian chemical attack. “Mr. Secretary, the Russians don’t believe the intelligence. How confident are you, Mr. Secretary–” Mitchell began to ask, as Lavrov was speaking. That’s when Lavrov nailed her. She violated the first rule of reporting… never become the story. SMH. Mitchell is the ultimate facepalm moment come to life.

My favorite part was Lavrov smirking after he put Mitchell in her place. He’s just dripping with contempt for her. That look would make most normal human being’s blood run cold. Not this hose beast. She arrogantly sneered right back. I guess no one ever explained to this moonbat that diplomacy applies to journalists as well. When you are in a foreign country, if you value your safety and your story, you show deference to your hosts, not hostility. This is vintage Mitchell and shows why she is so roundly despised and mocked out there.

@mitchellreports[6]
How does it feel to be embarrassed and made to look a fool on the world stage Andrea? #Lavrov[14]

As #Tillerson[17] and Lavrov enter room for photo-op, reporter yells question at Tillerson. Lavrov asks "Who gave you your manners?" pic.twitter.com/2OJCRQrSzC[18]

WATCH: Russian Foreign Minister Lavrov cuts off NBC's Andrea Mitchell when she asks a question during meeting with Sec. of State Tillerson pic.twitter.com/nsUpzFN6mb[22]