Joy Reid, the worst woman in America, just called Christian beliefs, “something out of a novel.” 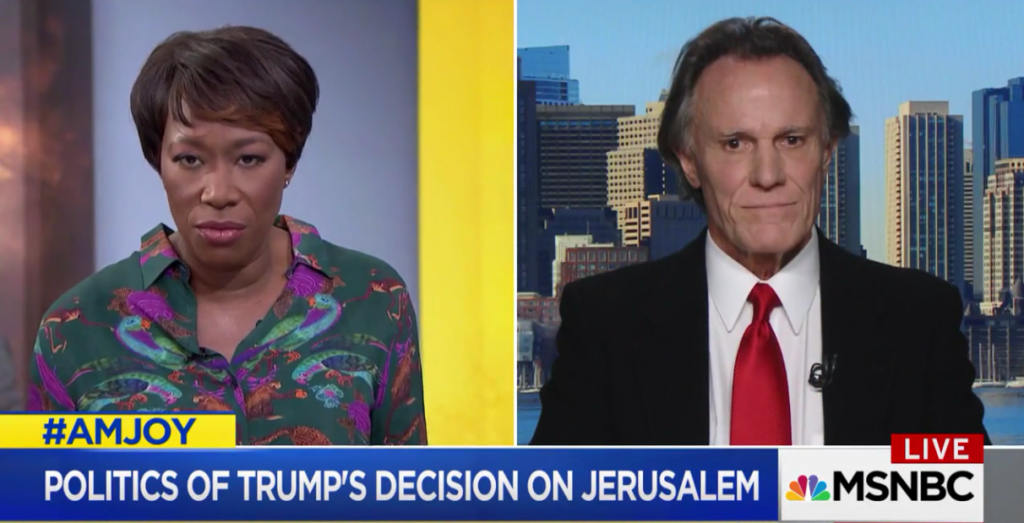 “That sounds like something out of a novel. Is it true that there are people who really believe that having Israel unified under, I mean having Jerusalem unified under total Israeli control will bring on the end times?” Joy Reid asked.

The guest on the show, Frank Schaeffer, responded: “Why yes Joy, you know I come from a fundamentalist Evangelical background and I grew up in the 50’s and 60’s, I’m 65, and when I was a child this was the Gospel end times version of reality that my parents believe in and many other Evangelicals.”

“Essentially, when you look at this, it was nothing to do with the Middle East or peace, or Palestinian rights or any of the difficulties that have represented themselves to responsible American political leaders or world leaders,” Schaeffer continued. “This was all about what we’re so familiar with, with Donald Trump and his nepotistic plan, throwing a little red meat to supporters and to big donors.”

President Trump said Wednesday that, “Jerusalem is the seat of Israel’s government — the home of Israel’s parliament, the Knesset; its Supreme Court; the residences of its Prime Minister and President; and the headquarters of many of its government ministries. Jerusalem is where officials of the United States, including the President, meet their Israeli counterparts.”

Sounds like he made the right decision then to recognize Jerusalem as the capital of Israel and move the embassy there, doing what his predecessors[2] could not.

I’m sure Joy has never read a novel in her life, so she probably doesn’t know how this all works. But Schaeffer was right. All this really signifies is that the Donald, at times, can play politics well. This was an easy win for him. This is something he could point his finger to and say he was able to accomplish something that the three previous presidents said they would do and failed to deliver on their promises.

Remember when Joy laughed at Ann Coulter for saying Donald Trump had the best chance to win the presidency?

Yes, Joy, this is not a novel you’re in. This is real life. Donald Trump is the President of the United States whether you like it or not. You can imagine yourself in some fairy tale world where Hillary or Bernie is president and all your problems are fixed. And I’m sure if Hillary Clinton, in your fantasy land scenario, did the same thing Trump did, you would praise her and her political savvy. So please, leave us alone.