Fireworks ensued last night[1] on Fox News between Megyn Kelly and Newt Gingrich. Let me state for the record here, I’m an equal opportunity hater of both sides of this argument. Megyn Kelly continually interrupted Newt Gingrich (which I haaate). She rolled her eyes and you could see her contempt not only for Trump, but for Gingrich all over her face. Unbiased the woman is not. As for Gingrich, he torched Megyn Kelly, calling her obsessed with sex and telling her he’s sick and tired of people like her. He had a meltdown and I would say that with that kind of anger publicly displayed, he’s through in politics. For better or worse, Gingrich hitched his wagon to Trump and he will sink or swim with his candidate of choice.

The truth of the matter is that the media IS obsessed with sex and they are totally in the tank for Clinton. However, Trump has not helped himself at all in this election. He parted ways with Roger Ailes, who had him coming out of the ditch after that tape. Now, he listens to Alt Right Steve Bannon. Bad news. Gingrich references that Trump is ahead in early voting and after what I saw yesterday, at least in Florida, that is true… but then he starts referencing tiny little races that aren’t going to turn the tide here and he kept speaking of two alternate universes. I assume he means the polls say one thing and the people are saying entirely something else. 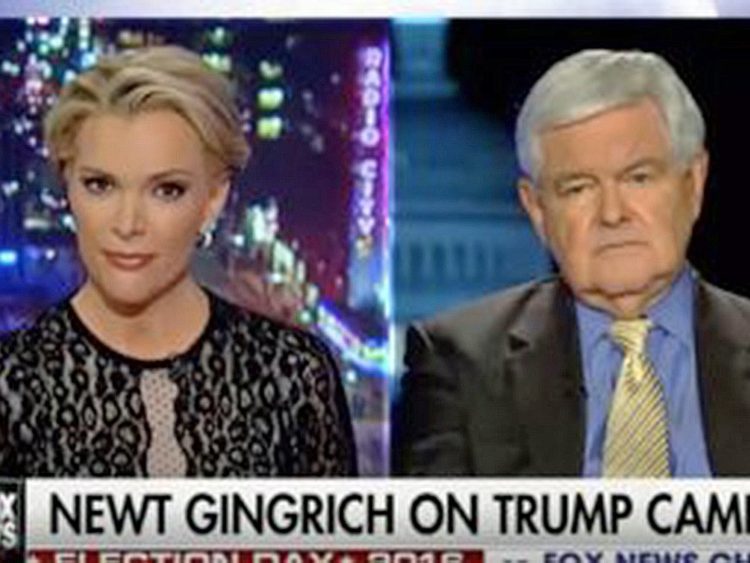 Former House Speaker Newt Gingrich and Fox News anchor Megyn Kelly squared off Tuesday night in a heated interview about how the media is covering the election.

Gingrich, who is an outspoken supporter of Donald Trump, accused Kelly and other journalists of treating the Republican presidential nominee unfairly.

Specifically, Gingrich took issue with the media’s extensive coverage of Trump’s lewd comments about women captured in a leaked 2005 recording and the allegations of several women accusing Trump of groping them.

“You want to go back through the tapes of your show recently?” Gingrich asked Kelly. “You are fascinated with sex, and you don’t care about public policy. That’s what I get out of watching you tonight.”

Kelly fired back, saying she was simply concerned for women should Trump be elected in November.

“Mr. Speaker, I’m not fascinated by sex, but I am fascinated by the protection of women and understanding what were getting in the oval office.”

Trump only opened a couple of offices in Florida. He stopped all campaign fundraising yesterday. For all the world, it looks to me as if he wants to lose and go on to his TV network. I have never seen a campaign run this way before and it looks like a colossal failure to me, but then again… Trump.

Gingrich is right that the media is obsessed with Trump’s sex life, but so is Trump. I wish all of them would just shut it on the topic and get back to the issues. Instead, we are subjected to non-stop reality TV theatrics. No one covered that a Democratic operative worked with Breitbart and Steve Bannon to discredit Marco Rubio and Ted Cruz, so Trump would be the nominee. The pied piper candidate by the way that Hillary Clinton wanted because she felt he was the only one she could defeat. All this crap of, “Yeah, but your guy is worse!” is just trite and tiresome. I’ve had it with all this.

Megyn Kelly has not been fair to Trump in her attitude etc. But this ginning up of anger by the likes of Newt Gingrich is dangerous in the extreme. Frankly, I’m personally sick and tired of both sides.