Silly me[1], I thought we put all this stupid, moronic racist crap behind us years ago. Evidently, not so much it would seem. I give you CNN… where a black Trump supporter, Paris Dennard, who also served in the Bush White House, had his ‘blackness’ questioned by another Democrat contributor on CNN, Keith Boykin. It was condescending and yes, racist. What? Because the guy’s a conservative AND a black man, he’s just not black enough? What the hell is that about? I don’t blame Dennard for getting angry. What an insult.

Dennard shot back: “Keith, don’t go there. Do not go there. I know what it means to be a black person in this country. I have experienced racism on a regular basis, by being a Trump supporter, and by being a proud American who happens to be a Republican. I get racist comments about my family, about my mother, about my girlfriend, about my character every single day and mostly coming from black people.” And I’ll bet he does, because the left cries racism all the time for people of color on their side, but see absolutely nothing wrong with attacking conservative people of color. It’s racism no matter the side of the aisle you are on. What a bigot. 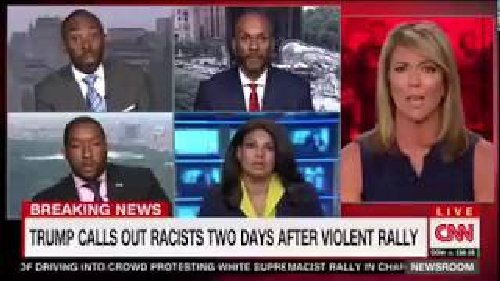 Mr. Dennard, who served as the Director of Black Outreach in the George W. Bush White House, reacted with anger as Boykin attempted to race-shame him.

Allegations of “Uncle Tom” behaviour are often hurled by left-wing activists as a means to silence or shame minorities who lean conservative. Recently, the phenomenon spread to Muslims or ex-Muslims[3] who find their political allegiances on the right of the political spectrum.

Despite the network hosts earlier urging Ken Cuccinelli to apologise for telling another contributor to “shut up” during a discussion, anchor Brooke Baldwin made no attempt to get Boykin to apologise for his on-air racism.

Speaking about the Charlottesville violence, Boykin baited Dennard, stating: “I’m ashamed that you as an African-American, Paris, will not say [that President Trump has not done enough].”

Boykin then condescendingly told Dennard to calm down. Why should he? If the shoe were on the other foot, I guarantee you Boykin would be livid and jumping up and down screaming over it. “I won’t calm down,” said Dennard. “I will not be attacked by you about my blackness because I happen to be a Republican.” Good for him. Glad to see someone take a stand like this. It’s long overdue.

Earlier in the day, CNN had asked Republican Ken Cuccinelli to apologize to Bernie Sanders supporter Symone D. Sanders. They had a terse discussion on CNN’s New Day, where Sanders insisted that Cuccinelli was “dismissing” the notion that the hate rally was an “egregious symptom” of a deeper national white-supremacy problem. She constantly interrupted Cuccinelli’s explanation for his position and spoke over him until he had finally had enough. Cuccinelli shot back: “Can I finish, Symone? Can you just shut up for a moment?” I don’t blame him either.

This is what passes[4] for debate on CNN… if you are on the right, you are shown no respect and vilified and if you try and defend yourself, they talk down to you. Both of these men simply stood up for themselves and I thought they did a great job of it.