I watched both of these Saturday Night Live clips[1] and they are not funny in the least. I tend to laugh at a lot of things, but not this. First off, Alec Baldwin does a horrendous impersonation of President Trump. It is absolutely insulting to the President. He doesn’t just poke fun, he demeans the President. This skit is a take on Independence Day, one of my all time favorite movies. It portrays aliens attacking the earth – specifically the US, but the gist is that it is illegal aliens. It shows Trump addressing the troops and acting moronic. If you weren’t turned off by SNL before, you will be after this.

Not only did Baldwin act like Trump was an idiot, a jab was made at alleged business interests in Russia, racism, sexism and lying. In the end, Saturday Night Live made the point that Trump would destroy the country and blame it on others. They basically called him a coward. They made fun of him, the military and anyone who supports President Trump. It was a political hit job and just insulting and disparaging. 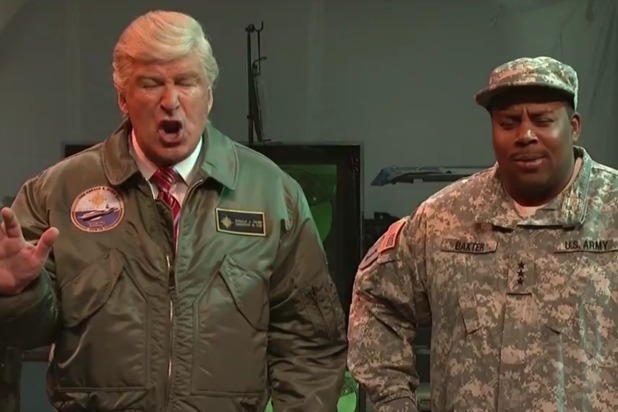 Anyone who’s seen the movie Independence Day remembers the scene when President Thomas J. Whitmore, played by Bill Pullman, gives the ultimate inspirational speech[3] to rally the troops — that against all odds, they can fight and defeat the evil aliens bent on destroying humanity.

On Saturday, SNL imagined if President Trump were in that same position.

Alec Baldwin returned as Trump, decked out in a flight jacket, as Trump has been seen wearing[4] recently. Trump tries and fails to give a similar inspirational speech to the soldiers gathered, but largely goes off topic.

In the movie, President Whitmore says: “We can’t be consumed by our petty differences any more. We will be united in our common interest.”

“Actually,” he says, “the aliens are already here. They’ve been hiding in this country for hundreds of years, it’s a fact. They’re shapeshifters. They look like regular people but they’re aliens. Look, there’s one right there.”

He points to Leslie Jones, a black woman.

“Yes she is, and so is the woman next to her, right there.”

He points to Sasheer Zamata, who is also black. She looks at Jones, and looks back. “Oh, OK. … No.”

But Saturday Night Live didn’t stop with attacking President Trump. They went after Ivanka as well. Scarlett Johansson was the host of the show for the fifth time. She ran a skit that was a commercial for Ivanka’s new perfume, ‘Complicit’. Not. In it, they portrayed the President’s daughter as vain and a mere reflection of her father. They stated she did not support feminism or women, which is the exact opposite of what she does. She has been a champion of women’s rights, equal pay and daycare for working mothers. She held a Woman’s Day event at the White House as well. The cast hit at the fact that Ivanka’s perfume is number one on Amazon currently and the title of the ad insinuates she is corrupt like her father.

This is the very worst episode of Saturday Night Live yet and that’s saying something. Shame on you people. They never hit Obama or Hillary like this, much less going after their children in the process. It was a despicable display of political bias. After seeing this, I will never watch the show again and I would bet a lot of Americans feel the same way.