CNN’s Jake Tapper got into a tense exchange with White House adviser Stephen Miller during an interview over Michael Wolff’s explosive new book, “Fire and Fury: Inside the Trump White House.” Tapper actually cut Miller off as they were discussing Trump’s mental state. And by cut off, I mean went to commercial. That pretty much tells you all you need to know about CNN’s bias on the subject. Shame on Jake Tapper. I am personally not a fan of Stephen Miller, but come on! Did you think Miller would get up there and say Trump was daft?

Tapper knows that what Bannon and Wolff have done here is a political hit job, pure and simple. The book is full of lies and propaganda from the left. Wolff himself in the book says all of it may not be true and that readers will have to make their own minds up on it. Tapper is trying to nail Miller here on the meeting with the Russian attorney. When Miller didn’t give him the dirt he was looking for, Tapper pivoted. He didn’t want to hear it. Miller was there to defend the President and on this I agree with him. You don’t become a billionaire businessman and run a presidential campaign the way Trump did and be mentally unstable. 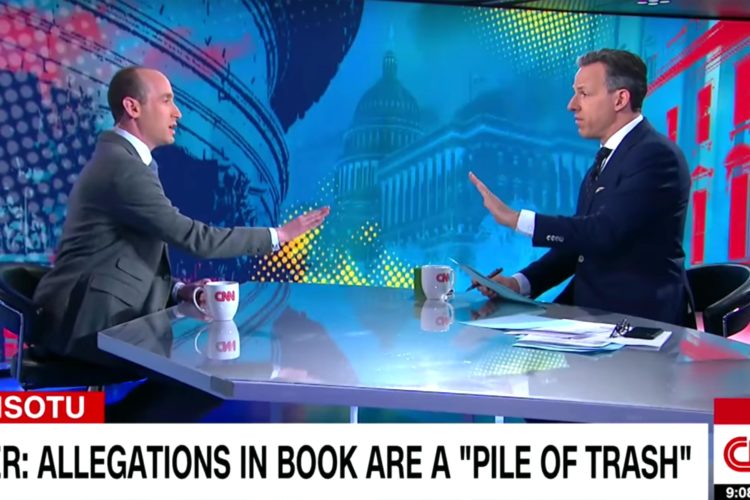 Miller laid into the piece of garbage book that Wolff brags will bring Trump down and rightly so. He shredded Steve Bannon for acting disgracefully, saying his critical comments about the administration in Wolff’s book were “grotesque.” “The book is best understood as a work of very poorly written fiction,” Miller said, going on to call Wolff a “garbage author.” Tell me what part of that isn’t true? Wolff is a Democratic operative that Bannon evidently had at the White House constantly. What does that tell you?

The book calls Trump a petulant child, which is not true. I have never been Trump’s biggest fan, but watch the man and the good he does. Yes, he’s quick to anger and tweet, but that is not the same thing. I have also not seen him be vindictive while in office. As far as Trump being a ‘political genius’, I’m not so sure on that point. But I will say this, he seems to be outsmarting all of these jackasses. But then again, it’s the intelligentsia of the media we are speaking of here.

Miller did not spare words with Tapper over CNN either. He said it gave the network great “joy to stick the knife in.” And twist it. Miller did go overboard on the whole genius and successful businessman part, but that is a fact and he’s defending Trump here. Tapper quipped that “I’m sure he’s watching and he’s happy you said that.” That’s when things got nasty. “You can be as condescending as you want. It’s part of your MO,” Miller said. If nothing else, Miller is a pit bull.

Tapper went on to say that he had no idea why Miller was going hard after CNN. Really Jake? No idea why? Both started speaking over the top of each other. Miller stated that CNN did “24 hours of negative anti-Trump hysterical coverage” that led to false reporting. “I think the viewers right now can ascertain who is being hysterical,” Tapper said. At one point, Tapper told Miller to “settle down.” Like a good little boy? Tapper tried to shift the conversation back to Bannon and Trump’s recent claim that his role in the campaign and administration had been overstated. Tapper pointed to his influence on various key issues like immigration, but Miller wasn’t having any of it.

Once Tapper asked Miller about Trump’s recent tweets calling himself a “very stable genius,” Miller again blasted CNN and the “toxic environment” it had created with its hostile coverage. Tapper lost all patience at that point as Miller blasted CNN as “extremely fake news” again. “Stephen, I get it. There’s one viewer that you care about right now, and you’re being obsequious … in order to please him,” Tapper said. “I think I’ve wasted enough of my viewers’ time.” Wow… arrogant AND condescending. Well done. At that point, Tapper cut Miller off and went to another segment after the break.

But… Trump got the last word in via Twitter. In Trump’s opinion, Miller destroyed Tapper. “Watch the hatred and unfairness of this CNN flunky!” he wrote. Well then… that’s a wrap. Game, set, match to POTUS.

Jake Tapper of Fake News CNN just got destroyed in his interview with Stephen Miller of the Trump Administration. Watch the hatred and unfairness of this CNN flunky!