Liberal bias in the media is nothing new and most Americans know about it. But rather than trying to be more honest and gain the trust of the American people back, the media has just doubled down on their bias — while still insisting that the bias doesn’t exist. Unfortunately, CNN just got caught red-handed[1]. 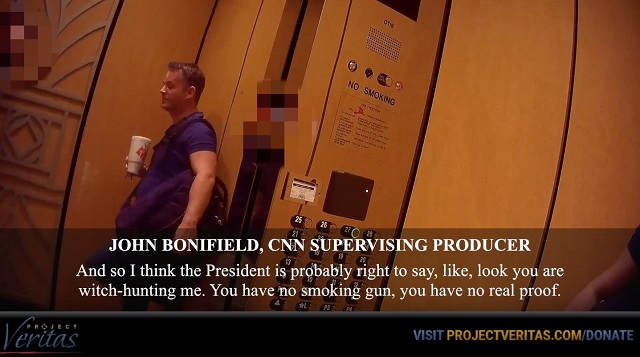 Project Veritas has just released a new video, showing a CNN producer admitting that the narrative on Donald Trump and Russia is “mostly bull****.” The reason it’s being pushed? For ratings.

John Bonifield was caught on camera saying, “I mean, it’s mostly bull**** right now. Like, we don’t have any giant proof.” He the continues on to say that the entire thing is nothing more than good business for CNN. “It’s a business, people are like the media has an ethical phssssss,” he scoffed. “All the nice cutesy little ethics that used to get talked about in journalism school you’re just like, that’s adorable. That’s adorable. This is a business.”

Attacking Trump, apparently, is working for them. “Trump is good for business right now,” he boasted.

And this isn’t something coming from some low-level producer, either. According to Bonifield, the directions came from none other than CEO Jeff Zucker himself. “Just to give you some context, President Trump pulled out of the climate accords and for a day and a half we covered the climate accords,” Bonifield explained. “And the CEO of CNN (Jeff Zucker) said in our internal meeting, he said good job everybody covering the climate accords, but we’re done with that, let’s get back to Russia.”

While the media has been floating the idea of Trump being some kind of lawless criminal who should be kicked out of office, that appears to be just another fabricated story. “I haven’t seen any good enough evidence to show that the President committed a crime,” Bonifield admitted. “I just feel like they don’t really have it but they want to keep digging. And so I think the President is probably right to say, like, look you are witch hunting me. You have no smoking gun, you have no real proof.”

James O’Keefe slammed the dishonest media for disseminating what is now notoriously known as “fake news.” And apparently, other media outlets should be worried — they might be next. “To report not on facts, but instead on narratives that yield high ratings, is exactly the definition of fake news,” O’Keefe said. “We said we are going after the media, and there is a lot more to come.”