While on MSNBC’s “AM Joy” with host Joy Reid, Washington Post writer Jennifer Rubin stated unequivocally that there is a “special place in hell” for women who defend “accused child molesters.” It’s clear that she doesn’t much care for facts or evidence. She must be a feminist.

She’s speaking, of course, of Roy Moore who has been accused of sexually abusing minors in the 1970s. Despite the fact that no evidence of these claims has come out and despite the fact that Gloria Allred refuses to allow a third party to analyze the handwriting in the yearbook, which is the most damning piece of evidence that they have, Rubin still thinks that a vote for anyone but Moore’s Democratic opponent is supporting a child molester.

Unfortunately for her, not a whole lot of people believe the allegations to be true. There is a lot of suspicion surrounding the timing of the claims, as well as the blatant lack of evidence and many people believe Moore to be innocent until proven guilty. 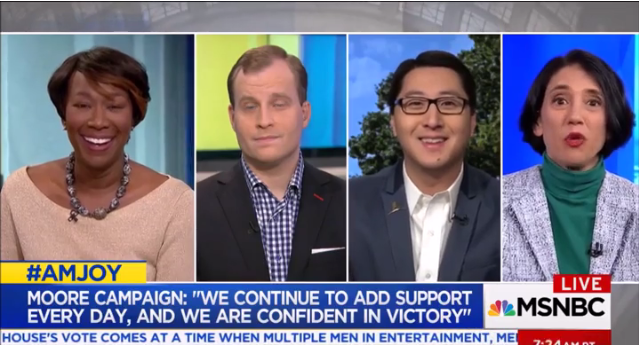 The segment started out with a clip from Fox News in which Kellyanne Conway urges Alabama voters against voting for Democrat Doug Jones, who is running against Roy Moore. While she did her best to not directly endorse Moore, she did make it clear that if Jones won, he would push the Democrat agenda of decreased border control and increased taxes. As we speak, Republicans are desperately attempting to scrape together enough votes to pass a tax reform bill and Moore would help in that endeavor. She never brought up the allegations, which is probably what triggered Reid and Rubin the most.

“Well, to quote Ivanka Trump, who I never quote,” started Rubin, “there’s a special place in hell for mothers who defend accused child molesters, and that would be Kellyanne Conway. I have no words to describe how really atrocious, how despicable this is.”

Except she never actually defended him. She never said that the allegations were bunk, she never said that even if Moore were proven to be a child molester, people should still vote for him, she didn’t say any of that. So, for Rubin to twist Ivanka’s words to condemn Conway to hell simply because the two disagree on politics is what is “really atrocious” here.

Watch the segment below:

Rubin is admitting here that a man’s career should be ruined by allegations, despite a lack of admission of guilt and evidence. This sets a frightening precedent for the future where any man can be accused by any woman who simply doesn’t like what he stands for and he is forced out of his career. I’m sure if more women faced this kind of thing, perhaps Rubin would be more sympathetic to his situation.