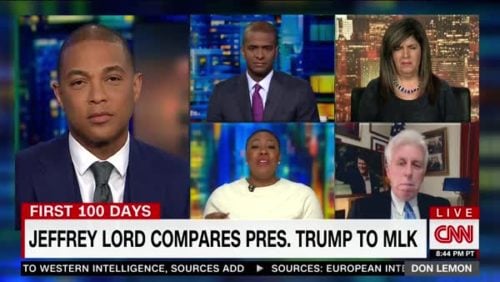 The left believes that it owns the rights[2] when it comes to talking about civil rights and civil rights leaders. Only Democrats and Progressives get to discuss those things. Everyone else just needs to shut up and sit down, or get cut off, as former Reagan staffer Jeffery Lord found out on CNN this week. Lord was a member of a four person panel discussing the Trump healthcare plan and when Lord compared Trump’s perseverance in staying on course and not being dissuaded from his campaign promise of repealing and replacing Obamacare, to the perseverance of Dr. Martin Luther King, Jr. in his fight for civil rights, all heck broke loose.

The arrogant condescending liberals on the panel, as well as Don Lemon, liberal host extraordinaire, had a complete conniption fit, accusing Lord of blasphemy. Because of course, as was said earlier, only certain people get to talk about civil rights and civil rights leaders. And apparently Caucasian males are not one of them. Where did the idea that only some groups have valid points about civil rights, come from? The left of course.

And as always, when the left doesn’t like what someone is saying, they either start mocking them, shout them down, or they simply shut them off. All three petulant tactics were employed by Lemon and his other whiny pandering liberal guests. They proudly displayed their intolerance for other perspectives while patting each other on the back for attacking Lord.

CNN’s ratings are in the trash. Their only dependable viewership is airport travelers in between flights. And this kind of narrow minded bigotry against Republicans and against anyone who isn’t a liberal and wants to talk knowledgeably about MLK, is exactly why. Newsflash liberals… MLK was a Christian, an American and a hero of excellent character to all of us. No, you don’t get to “own” him and his peaceful legacy. We all are the bearers of his dream. And what was that dream?

Dr. King said, in his landmark ‘I Have a Dream’ speech, “I have a dream that my four little children will one day live in a nation where they will not be judged by the color of their skin, but by the content of their character.”

And that is a dream that Americans of every ancestry have for their children. We all share that dream. It is people like Don Lemon who take us backwards as he judges and condemns folks like Mr. Lord when they offer a different perspective. It sounds an awful lot like Lemon is judging Lord for something other than the content of his character. Hey Don Lemon, what happened to the dream? The dream only works when folks like Lemon and his other guests leave behind their narrow judgmental proprietary attitude toward civil rights issues and leaders and start listening to all voices, not just the monolithic monotonal voice of the American Left.