Yes, CNN Really Ran THIS on National TV and Everyone is Laughing at Them [VIDEO]

The media bias against Donald Trump is no secret, but you would think they would at least stick to covering stories that matter. They could be covering the investigation into Trump’s alleged ties with Russia, or writing about ISIS — breaking news that people care about. Instead, the media has sunk to frivolous new lows and they’re getting laughed at for the ridiculous stories they’ve chosen to run[1]. 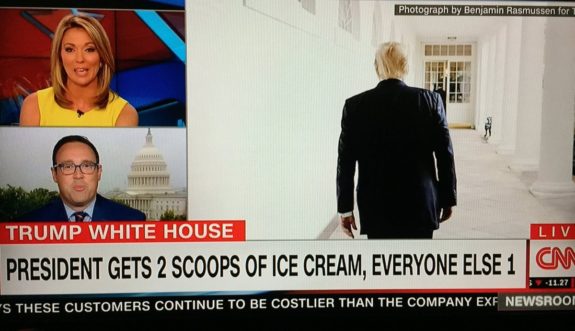 “Time” Magazine ran an article that featured just short of 4,000 words… on Trump’s ice cream preferences at the White House. (No, really.) And CNN thought this was newsworthy for some reason and picked up the story for themselves.

“The waiters know well Trump’s personal preferences,” the article read. “As he settles down, they bring him a Diet Coke, while the rest of us are served water, with the Vice President sitting at one end of the table. With the salad course, Trump is served what appears to be Thousand Island dressing instead of the creamy vinaigrette for his guests. When the chicken arrives, he is the only one given an extra dish of sauce. At the dessert course, he gets two scoops of vanilla ice cream with his chocolate cream pie, instead of the single scoop for everyone else. The tastes of Pence are also tended to. Instead of the pie, he gets a fruit plate.”

What incredible breaking news! No wonder CNN picked up this timely and important story!

This explains a lot. pic.twitter.com/TeexrVv4GK[3]

@WFKARS[7] @davidfrum[5] Note: in new, very good Bio, Nixon was always served very good wine… the rest of the staff got cheap wine. It's good to be king.

Because the idea of the White House staff knowing the President’s tastes is just insane, right? Alert the presses!

No wonder people are laughing.

When Donald Trump is being criticized because he eats two scoops of ice cream, then perhaps it’s simply a sign that he’s too successful.