Glenn Beck is a very good man[1] and a good Christian. He didn’t go to Charleston for fame, he went to pray with others not only for those innocent souls who were tragically and brutally gunned down, but to pray for the man who murdered them in cold blood. I don’t blame Thomas Roberts for getting choked up. It choked me up as well. Out of the most evil of actions, love and healing can come if people put their hate away and come together. Sorry to inform Al Sharpton and the Black Panthers that a race war was not sparked by this horrific deed. Instead, Christians hugged each other and prayed. They saw the evil actions of one man for what they were – a psychotic’s malevolent intentions brought to life in an insane fit of rage. Roof deserves to be executed for his actions, but the families of his victims are also offering him forgiveness. Glenn Beck is a leader helping to heal a horrible wound and help those who are bereft in their hour of need. 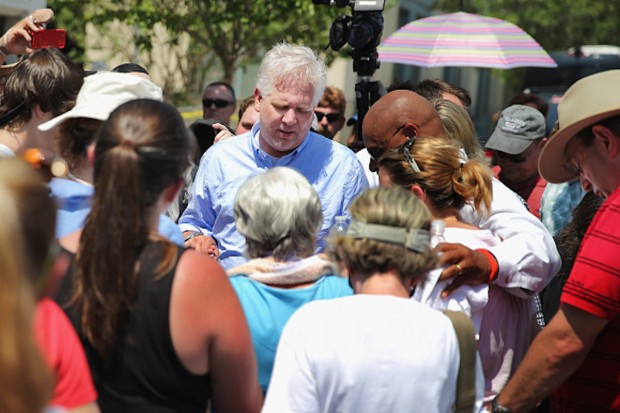 CHARLESTON, SC – JUNE 19: Conservative television and radio personality Glenn Beck
leads a crowd in prayer outside the historic Emanuel African Methodist Episcopal Church
where nine people were shot to death earlier this week June 19, 2015 in Charleston, South Carolina.
Authorities arrested Dylann Storm Roof, 21, of Lexington, South Carolina, after he allegedly
attended a prayer meeting at the church for an hour before opening fire and killing three men and
six women. Among the dead is the Rev. Clementa Pinckney, a state senator and a pastor at the church,
the oldest black congregation in America south of Baltimore, according to the National Park Service.
(Photo by Chip Somodevilla/Getty Images)

MSNBC anchor Thomas Roberts broke down on-air Friday while reporting live from Charleston, South Carolina, and the Emanuel African Methodist Episcopal Church where nine people were massacred earlier this week. And it happened as hordes of people who joined Glenn Beck for a prayer vigil showed up at the church.

As the bond was being set for accused killer Dylann Roof, Roberts described the scene of a mass of people showing up and singing. Unbeknownst to him, it seems, that crowd was at least in part the work of Glenn Beck, who flew down to pray in Charleston and invited people to meet him nearby. Beck can even be seen walking in the background of Roberts’ TV shot at one point.

Jonathon, I was unaware it was @glennbeck[2] it was a beautiful moment to witness & report #CharlestonShooting[3] https://t.co/wz799vPN8C[4]

According to a Periscope livestream being held simultaneously by Beck’s staff, a couple hundred people (a rough estimate given by the person doing the livestream) had joined Beck in a nearby park to pray and talk about change. The group then made its way to the church. That seems to coincide exactly with Roberts’ emotional play-by-play.

“Can we look over here right now. It’s kind of heartbreaking,” Roberts said, his voice cracking. “They’re singing and a whole flood of people showed up at the same time.”

“So you’re hearing from the family, and then this whole group of people showed up. And they’re singing a gospel song. … I apologize,” he said, stopping himself and trying to fight back tears. He’s referring to several family members forgiving Roof during his bond hearing.

“But you can see the outpouring of support for his community. It goes all the way down the street of people who showed up at the exact same time that this arraignment was going on,” he continued, amazed.

“I’m sorry,” he concluded, before a guest stepped in.

If you look at 1:27 in the video below, you can see Beck and his wife walking behind with the crowd (look for the young man in the colorful backwards cap — his phone was Periscoping the event)*

God has a funny way of touching even the staunchest of sinners during a time like this and turning hearts of those in need. And I know of nothing more powerful than heartfelt prayer when there has been severe loss and tragedy as there has been in Charleston. There is no racism here… just Christians coming together in love and grief. The outpouring of support for the community will help heal these people and may be the beginning of a truly great awakening. This is a time to stand together and be as one voice calling out to God. One evil gunman cannot tear asunder what God has brought together. The MSNBC anchor was blown away by the love and faith he saw in Charleston and this is only the beginning.