You want to know what real courage is?[1] Ben Shapiro having the guts to go on a liberal media show and tell the truth about transgenders. Ben was literally man-handled by Zoey Tur. I’d never even heard of him before and boy, has Inside Edition gone down the sewer. When Shapiro pointed out that referring to transgender people by their preferred instead of biological sex is “mainstreaming delusion,” Tur came violently unglued. Feigning female dulcet tones, he grabbed Ben by the back of the neck and snarled, “You cut that out now, or you’ll go home in an ambulance.” Later, Tur tweeted a threat to “curb stomp” Shapiro. He also threatened Ben with violence immediately after the show. I don’t blame Shapiro one bit for going after Tur legally – he’s a bully. 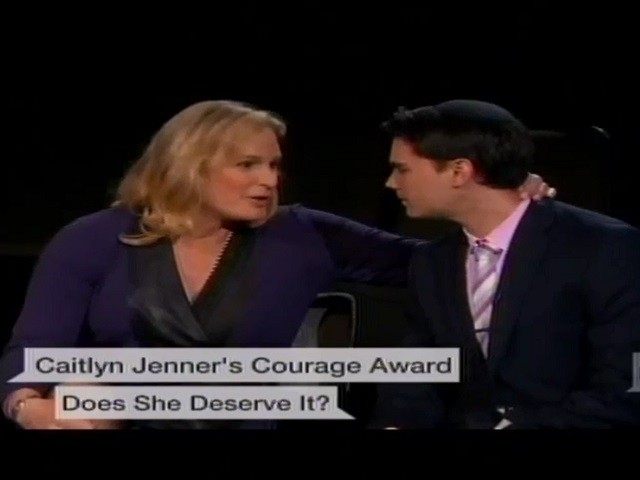 Shapiro filed the report Sunday morning, two days after a contentious exchange[3] with Tur on the HLN program Dr. Drew. On a panel discussion over Bruce Jenner’s receipt of ESPN’s Arthur Ashe Courage Award, Tur grabbed Shapiro’s neck and growled, “You cut that out now, or you’ll go home in an ambulance.” Shapiro later alleged that Tur had threatened him after the appearance, “I’ll see you in the parking lot,” and that CNN security had escorted Shapiro to his car after ensuring Tur had left the premises. Tur also tweeted out on Friday that he would like to “curb stomp[4]” Shapiro.

Tur’s threats against Shapiro followed Shapiro arguing that referring to transgender people by their preferred instead of biological sex is “mainstreaming delusion.” Of Jenner, Shapiro declared, “How he feels on the inside is irrelevant to the question of his biological self.” After Tur suggested that Shapiro knew nothing about genetics, the following exchange then occurred:

Shapiro asked if the discussion was supposed to be on genetics and asked, “What are your genetics, sir?” Pinsky said to Tur, “I’d stay away from the genetics and back to the brain scans.”

Tur then said to Shapiro, “You cut that out now, or you’ll go home in an ambulance.” Shapiro responded, “That seems mildly inappropriate for a political discussion.” Oduolowu said that, to be fair, Shapiro was being rude, to which Shapiro answered, “I’m sorry, it’s not rude to say that someone who’s biologically a male is a male.” Tur stated, “You just called me a ‘sir.’”

After some of the other panelists, particularly radio and “Chain Reaction” host Mike Catherwood, objected that Shapiro knew that what he said would be “insulting” and “inflammatory.” Shapiro responded, “It’s not a matter of insulting or inflammatory. It’s a fact. You are a male. Dr. Drew is a male.”

Shapiro explained to Breitbart News why he filed the police report. “Just because the left has designated someone a member of the victim class does not mean that that person gets to infringe the rights of others,” he said of his report. “Until the left learns that, their aggression will not stop.” Shapiro also said that he had spoken with a detective at LAPD, and that he would be pursuing any possibility of charges regarding alleged criminal threats.

This is a sick and twisted farce. We now have elevated perversion and delusion to the status of honor, or at least they are trying to. Years ago, I had a colleague and a friend in Vegas. We prepped tax returns together. He became a she and I never got used to it. Not only was he an unattractive woman, I could never reconcile him being married to a woman and having children. He was confused and so was his family. We went our separate ways eventually. He had numerous other problems, but the change was one of the primary factors why his life was basically ruined. Ben Shapiro stated the facts and told the truth. No one else seems to be willing to stand up and do the same. That’s a very bad sign. I now hear many conservatives justifying this as a personal choice and many of those are Christians. Think long and hard about the moral decline of this country. Consider the debasement of gender and the role that it has always played in society and family units. This is a communist move to destroy morality and the family ideal as we have always known it. I say good for Ben Shapiro and bad for the Leftist bullies.