I never thought I’d be agreeing with Bill Kristol[1], but he gets it right here. Megyn Kelly needs to get over herself and Trump doesn’t owe her an apology. She’s not just attacking Donald Trump either… she’s also going after Ted Cruz. She posed a question to him yesterday asking: “If you have a husband and a wife who are illegal immigrants, and they had two children here who are American citizens — would you deport all of them? Would you deport the American citizen children?” she asked. Cruz replied that politicians should first tackle immigration by focusing on issues of bipartisan agreement, including stopping illegal immigration and “improve and streamline” legal immigration. She kept after him, going after Trump’s response that that they should all be deported. Cruz told her she was acting just like a liberal journalist and that she was also sounding suspiciously like Barack Obama. Sounds to me like she’s a shill for the GOP and Jeb Bush, or worse yet, for the Democrats[2]. 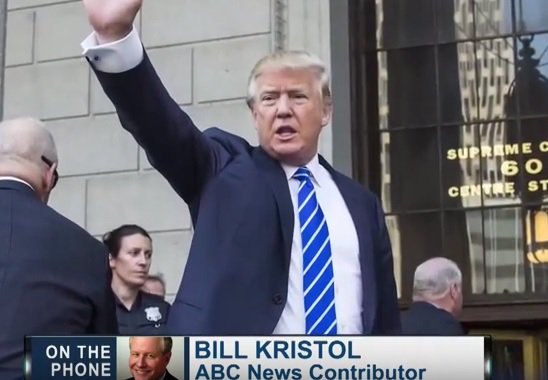 Kristol weighed in on the Trump-Megyn Kelly controversy.

Steve Malzberg: Why is Donald Trump doing this again?

Bill Kristol: I don’t know, good publicity… Seems like maybe it’s a little excessive. On the other hand, you know, people in the news business should… They say things about other people, they shouldn’t be too thin-skinned. I’m not really disturbed by it. I just think it’s antagonizing to a fair number of Megyn Kelly fans who you’d think Trump might want to have on his side…

Bill Kristol: Ahh, he should just go on doing his thing.

When I first heard of Trump’s attack on Kelly yesterday, I thought, okay… that’s a bit much and why are you continuing this after making peace with Fox News? A friend said she thought there was more going on behind the scenes on it. I now think so too. Isn’t it amazing that Kelly is viciously going after the two most conservative candidates that are outside the GOP mainstream? She’s not doing this with the Dems. She’s not doing this with Jeb Bush or the other GOP candidates. Her sights are squarely focused on Trump and Cruz. Her questions are not fair and balanced and depending on the outcome in court over the 14th Amendment, they will then know which way her question can be answered. But that’s not the point – Kelly is thin-skinned and is determined to make a name for herself by being the attack dog that goes after those who stand against illegal immigration and birthright citizenship. Kelly is a liberal journalist and full of herself. Fox could do much better.