Exactly right![1] The liberal media is trying to cause a racial rift and pit us against one another. They don’t speak for the majority of Americans. They are pushing a Marxist agenda and having us at each other’s throats fuels their plans. What happened in South Carolina was horrific, but that was the doing of one insane, evil individual… not all of white America. The media went right back to their racial whore mongering instead of trying to help heal wounds, assuage grief and bring us together in faith and love. Racism has only been rekindled because it is politically advantageous for liberals, white and black. They don’t care who they hurt if they can grab more power using it as a weapon. It’s sick and twisted. 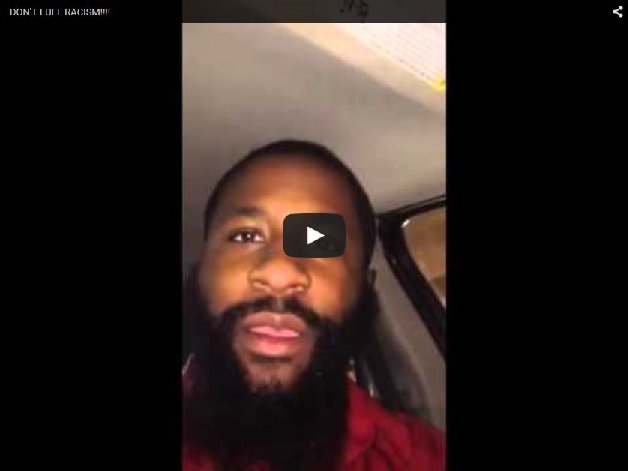 A black man had a few things to get off his chest after seeing some of the liberal coverage of the Charleston shooting.

In an approximately 6-and-a-half minute video, Eric July takes white liberals to task for fueling racism in America and using the Charleston shooting to promote their flawed worldview.

His remarks are very much in the spirit of Kisa Jackson, who also, as Western Journalism reported[3], made a video sitting in her car earlier this month regarding the conduct of the police in McKinney Texas.

July opens his video stating the things which all Americans (minus some fringe elements) must surely agree. “This situation that happened in South Carolina is disgusting, it’s sickening. That somebody would walk up in a church, a house of God. They out there praisin’ His name, and somebody would come out there and shoot these brothers and sisters…” he says.

“But hold up right on cue, right on cue,” July continues, “here came that white liberal! And I knew it was going to happen…Where this white liberal would come and try to use this as political game or a reason to say, ‘Hey black folks, I’m different.’”

July makes it clear that he means not a particular white liberal, but many.

This should be a moment to unify, July explains. “Most white folk aren’t commending this coward going up in a house of God and shooting these folks. They are equally sickened by this situation.”

Jules goes on, stating: “I didn’t make this video to just highlight that. I made this video to encourage brothers and sisters of color to use your own logic.”

That white liberal is “going to use this as a tool, to say ‘Hold up, you black folk can’t do it. That world is out to get you all. So I got to help you all.’ Nah, no, shut up. You don’t think on our behalf; quit fueling racism.”

“They have been doing it for some long, and I’m sick of it. Shut the hell up! You don’t speak on my behalf,” he says.

Chicks on the Right identified some examples of liberals going off the rails in the aftermath of the Charleston shooting. One editorial was titled: Charleston Church Massacre: The Violence White America Must Answer For[4]. Another was in the Washington Post, titled: Charleston, Dylann Roof, and the Racism of Millennials[5].

The latter states[6]: “It shouldn’t be lost on anyone that this massacre occurred in a state that flies the Confederate battle flag, a symbol of white supremacy, at its state house. These symbols and tactics remain in our national conscience, passing on from generation to generation, like a sinister genetic code in America’s DNA.”

Chicks on the Right concludes[7]:

“All of these examples are not signs of individual mental illness.” Um – YES THEY ARE! This is ONE person. ONE idiot. ONE racist piece of garbage. ONE anomaly out of thousands of millennials who do NOT routine[ly] run out and shoot up black churches.

Notice that the media switches to blaming guns when whites are slaughtered and when it is blacks, they go for the racism card. Then they go for the guns as a one-two punch. This isn’t about a flag or white supremacy… it is about one highly disturbed, insane, evil individual who decided he wanted a race war. Gee… wonder where he got that? Sounds a lot like Charlie Manson. Many liberals out there want a similar scenario to unfold – it would give them the excuse to pass more laws, more regulations and to take away more rights. It’s about control in the end and always has been. Eric July is right… now is the time to unify and to turn our backs on the racist hate being pushed here. Turn to God and away from the Marxist liberals and media.