Tucker Carlson has made quite a name for himself battling leftist idiots who can’t seem to catch on that appearing on his show means they’ll be eaten for lunch. Carlson’s latest victim is socialist professor Caroline Heldman and she didn’t stand a chance[1]. 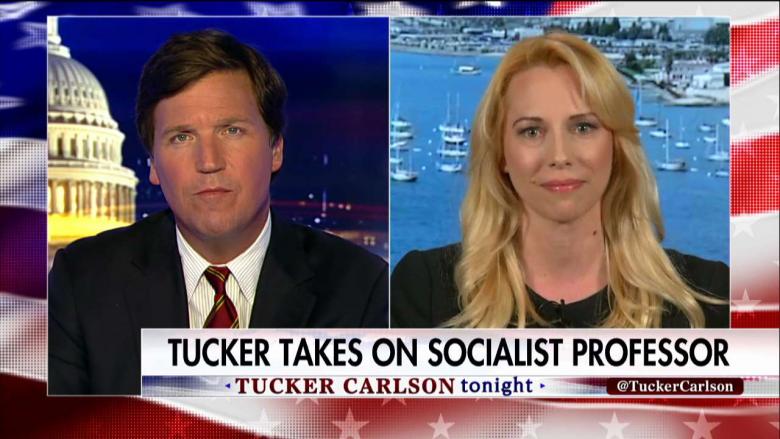 Heldman is a professor at Occidental College, and she’s complaining about how people aren’t paying enough in taxes. Already, most Americans pay somewhere between 10% and 40% of their income, with the top one percent of earners paying even more. Yet for Heldman, that’s not enough. She wants the wealthiest Americans to pay as much as 80% in taxes, if not more.

On “Tucker Carlson Tonight” she argued that under Presidents Eisenhower and Kennedy, the wealthy paid up to 90% in taxes and that we should return to that again in order to provide a better safety net for other Americans. Carlson pointed out that Americans already pay more in taxes than other countries do, but that doesn’t matter to Heldman. “Taxes are the price we pay for civilization,” she argued.

But that was when Carlson really laid down the gauntlet.

“You’re asking other people to give their money to the government,” he pointed out. “Why aren’t you giving 70% of your income to the government? You could!” Flustered, Heldman replied, “Well I’m not in the top 1% but I have no issue — ”

“You don’t need to be,” Carlson interrupted.

She tried to regain the upper hand, but it didn’t go well. “Well that’s the argument I’m making right now,” she said. “That’s it’s not about working class Americans or people like me who are upper income Americans, um, it’s really about the wealthiest top 1% now — I pay about 30%.”

“Why not pay 70%?” Carlson demanded. “I don’t understand. Like what’s holding you back?” At this point, Heldman became visibly flustered, as Carlson urged her to practice what she preached. “You know what’s holding me back?” she answered. “If, if, if I knew how to do that, um, I would have no issue doing that, but the tax code is totally convoluted.”

He wasn’t going to let her get off that easily, though. “No, no, no, let me simplify it for you,” he answered. “Just write a check. Pay your taxes. Just figure it out. You pay 30%? Then just figure out the other 40% and write a check to the U.S. Treasury.”