#BringThemHome: How Dare We Make A Deal With Iran While Americans Are Still Being Held As Prisoners [Video]

Barack Obama has never respected[1] that “we leave no one behind.” The Bergdahl swap had almost nothing to do with Bergdahl and everything to do with political capital and closing Gitmo. So it would make sense that Obama doesn’t give two cents for these men imprisoned in Iran. All that matters to him is striking an historic deal with Iran over nuclear weapons that does nothing but ensure they get said nukes. It does however please the Ayatollah which seems very important to Obama. The media hasn’t reported on these Americans because they are acceptable casualties in their collective agenda of linking arms between communists and Islamists. It’s admirable that Montel Williams goes to bat for these men, but Obama won’t listen to him or anyone else. 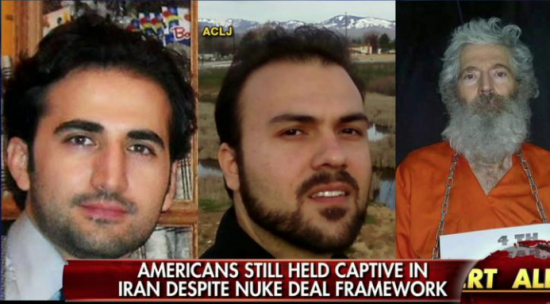 Greta Van Susteren slammed[3] the mainstream media for its lack of reporting on the U.S. Marine veteran who has been held in Iran’s worst prison for more than three years.

Montel Williams went “On The Record” earlier this week[4] to ask the public to help raise awareness for Amir Hekmati, the jailed veteran (below, right). 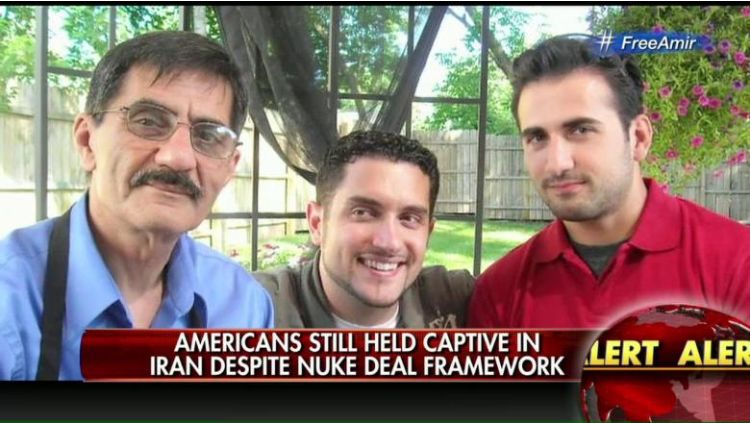 On Thursday, Williams returned to the show to discuss the case again, in light of the announcement[5] by the Obama administration of a framework agreement on Iran’s nuclear program

Hekmati, an Iranian-American, was born in Arizona but held dual citizenship when he flew to Iran to visit his ailing grandmother.

Williams said a few days ago that Hekmati is in a dire situation, being whipped and forced to take drugs so that he could be tortured with the withdrawal symptoms.

On Thursday, Secretary of State John Kerry said conversations are continuing on the release of American prisoners. Others known to be held include American pastor Saeed Abedini[6] and former FBI agent Bob Levinson[7].

Williams said he has “no idea” what Kerry meant with that statement.

Williams pushed back, asking Greta how Obama could say that while these Americans remain imprisoned.

“Would not getting an American soldier back from the grips of a terrorist country that is torturing him be one of our objectives? So I don’t understand what that meant,” said Williams.

He added that the State Department may think he’s “pompous” for speaking out about this and demanding to know more.

But he said he only wants the administration to provide more information to the public.

“Don’t call me. Tell the American public what you’re doing. Since you and I started talking about this, there have been 18 million impressions of people in America looking at the story. That means America wants to know: how dare we make a deal and even contemplate signing one in a month, without bringing our citizens home? I don’t get it,” he said.

Getting emotional as he spoke of Hekmati’s time in jail, Williams highlighted the fact that the veteran is being held as a prisoner of war based on his service in Iraq.

But he said Iran is not granting him the basic rights guaranteed to POWs under the Geneva Conventions.

“This man doesn’t even have access to a counselor. He hasn’t seen a counselor, he has no Red Cross access. Please just give this soldier the dignity of life! We give it to these guys down in Gitmo!” he said.

Williams said Secretary Kerry has not spoken to the family to let them know what’s happening.

“This is something that Secretary Kerry should do. He’s a Marine! The reason he’s able to fly over and negotiate is because of the lives our boys put on the battlefield,” said Williams

He called on viewers to get involved and spread the word about the jailed Marine by using #FreeAmirNow on social media.

These men were only kept alive by the Iranians as possible bargaining chips. As far as basic human rights, Iran could care less about the Geneva Convention. This is a travesty being played out in front of the whole world. Our president will trade five stone cold killers for a Muslim convert deserter, but he won’t even address the plight of a veteran, a pastor and a former FBI agent – all residing in a black pit of a prison in Iran and being subjected to torture constantly. Obama could have easily requested the release of these men during negotiations, but didn’t even bother. Kerry just parrots some vague line about continuing conversations… which is weasel speak for forget about these men. These men need to come home – we need to do right by them and save them. Just whose side is Obama on anyway?