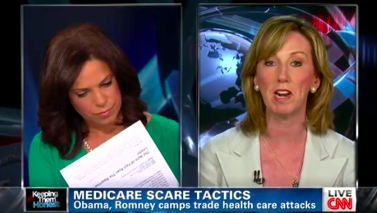 Excuse me, while I sift through this bulls**t

I had a REALLY bad episode of insomnia last night, therefore, I was unable to promptly respond to a tweet sent to me by Robert Stacy McCain concerning Ali Akbar exposing CNN’s Soledad O’Brien’s latest incident in liberal media bias. : Did she use Wikipedia again?

She was reading: The Myth of Paul Ryan The Bipartisan Leader[4]. She never cited it, but used its contents. In fact, she claimed to be reading a direct statement from Senator Wyden’s (D-OR) office, but was in fact reading this excerpt from the blog:

The Romney campaign’s lone evidence that Ryan is a bipartisan leader amounts to a vague blueprint he co-wrote with Democratic Sen. Ron Wyden (D-OR) late last year that mirrors key elements of his Medicare plan. Wyden voted against Ryan’s budget and said Romney’s characterization of their work was dishonest.

“Governor Romney is talking nonsense. Bipartisanship requires that you not make up the facts,” Wyden’s office said in a: statement[5]. “I did not ‘co-lead a piece of legislation.’ I wrote a policy paper on options for Medicare. Several months after the paper came out I spoke and voted against the Medicare provisions in the Ryan budget. Governor Romney needs to learn you don’t protect seniors by makings things up, and his comments sure won’t help promote real bipartisanship.” 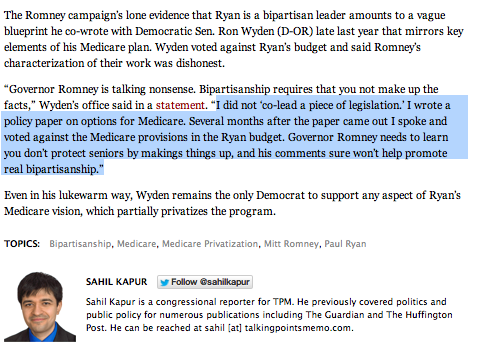 BUSTED! This is just as entertaining as the time when Ms. O’Brien used Wikipedia to define Critical Race Theory in an interview with Breitbart’s Joel Pollak last March[7]. :  Robert Stacy McCain also posted about this unbelievable event[8]: writing—: “The Most Trusted Name in News”? She’s a disgrace.