Oh look, another media person turned out to be a total pervert and sex creep. Imagine my surprise when I found out. This one is going to knock your socks off. 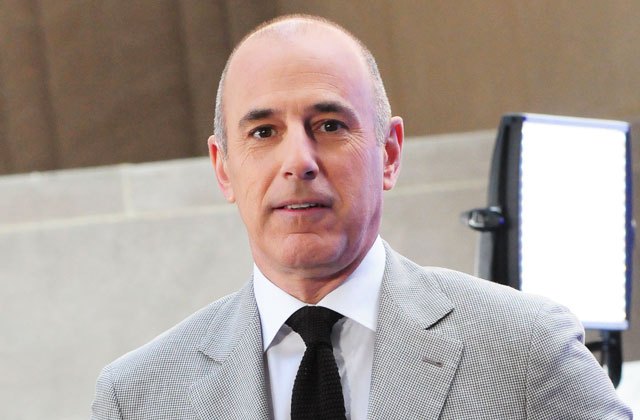 A former employee, who was married at time and in her forties, has accused Matt Lauer of making sexual advances towards her. She says he told her “you’re no fun” when she tried to inch away from him during a car journey where he was sitting too close to her.

In 2001, she claims Lauer used a button under his desk which locked the door to his office from the inside. She was asked to his office and he used the button to trap her in the room, and then told her to unbutton her blouse. She then said the newscaster bent her over a chair and had sex with her until she passed out. She told The New York Times that she woke up on the floor with her pants down. She is currently not releasing her name.

This incident is one of many that has led to the firing of Lauer[2] from NBC. They informed the news host he was being fired after discovering lewd photos and text messages that Lauer sent an intern during the Sochi Olympics.

Once news broke that he was being fired, an avalanche of accusations came his way of sexual misconduct. He has been accused of flashing his penis at a woman and purchasing a sex toy for another with a note saying what he would like to use it for… you can imagine.

The intern who he allegedly sent these lewd pictures and texts to told the HR department of NBC news on Monday. Lauer was let go less than 24 hours later. Page Six reports the messages “showed incontrovertible proof of inappropriate sexual behavior on his part.” Yeah, no kidding.

An NBC spokesperson stated, “We can say unequivocally, that, prior to Monday night, current NBC News management was never made aware of any complaints about Matt Lauer’s conduct.” Let’s hope that is true.

President Trump weighed in on the situation via his normal mode of communication.

Wow, Matt Lauer was just fired from NBC for “inappropriate sexual behavior in the workplace.” But when will the top executives at NBC & Comcast be fired for putting out so much Fake News. Check out Andy Lack’s past!

This just goes to show that media types are all perverted. It’s not healthy for any one human to have the kind of power and fame that these people are afforded. Time to drain the Washington swamp, the media swamp and the Hollywood swamp.