Joshua Feuerstein of The Radicals[1] was on CNN discussing Christianity, the Starbucks red cups controversy and Barack Obama. He was the one who started the whole ‘red cup’ fiasco. He flat out accused Obama of not being a Christian. I would agree with that. I frankly believe he is a Muslim. He’s certainly a Marxist. Now onto the Starbucks kerfuffle. That is false. The red cups frankly don’t upset Christians. We all know that Starbucks rolls out various holiday cups. They’ve never put Christmas items on their cups. Starbuck’s does not have a policy against Christmas or Christians. They are so politically correct, they basically offend everyone. However, Christmas and Christianity are being removed from our society. These media Marxists use our religion against us. Children aren’t allowed to celebrate Christmas in school… it has been removed from stores and society at large. Joshua and I don’t see eye to on a number of things, but Obama not being a Christian… that we agree on as well as Christmas being scrubbed from public view. 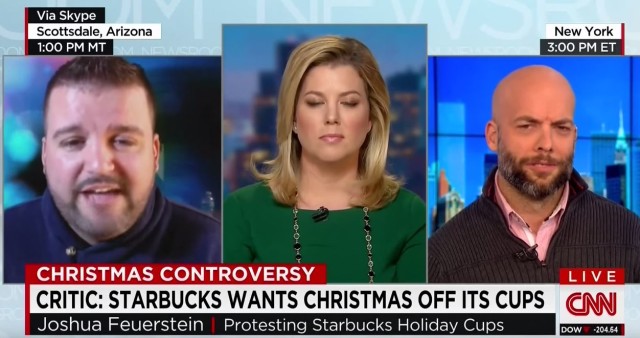 The Radicals very own Joshua Feuerstein was invited to be on CNN today to discuss Starbucks new politically correct holiday cups.

Watch what mysteriously happens when Joshua tells the truth about Obama…

Yes, that just happened! CNN cut Joshua’s audio when he started to talk about Obama not being a Christian!

And to make things even worse, he couldn’t hear a single thing the other commentators were saying!

Of course they blamed it on technical difficulties, but we all know it was an intentional act to avoid having America hear the truth.

What Joshua was trying to say is that we live in a Judeo-Christian society, and if it weren’t that way Obama wouldn’t have had to pretend to be a Christian to get elected.

How could a man who claims to be Christian adamantly support abortion, planned parenthood and gay marriage?

On top of all that, Obama says there are “many ways to get to heaven.” Literally the whole point of the Bible and being a Christian is that there is only ONE way to get to heaven, and that’s through our Lord and Savior Jesus Christ.

Joshua, we commend you for your RADICALness and for calling out the truth, despite it being unpopular to do so…

If you all love Joshua and think CNN cutting his audio was as lame as we do please SHARE this video and comment below!

I doubt that CNN deliberately cut this guy off when he accused Obama of not being a Christian. They want that controversy. But, they could have… they’ve certainly done worse. This time though, as much as I hate saying it, I think it was technical difficulties on CNN’s end. If they did cut it because he was referring to Obama not being a Christian, I still wouldn’t be surprised. The media does not like discussing the fact that Obama went to Reverend Wright’s church for years where he preached Liberation Theology. Many of Wright’s attendees are Muslims masquerading as Christians. Most of his flock are chock full of hate and racism. The media has played games from the beginning over Obama’s theocratic leanings. He doesn’t regularly attend church and grovels before Islamists. He also hates Israel. So, I think we can all be forgiven for believing he is not a Christian. Actions speak louder than protestations. But please… enough of the Starbucks red cup controversy.