CNN Gets Punked By Hurricane Survivor: You’re Still ‘Putting a Microphone In My Face?’ [VIDEO]

Whoa![1] I’m pretty sure this CNN reporter doesn’t know exactly what hit her here. She looks more shocked than the hurricane victim she is interviewing and with good reason. A female CNN reporter named Flores was at a shelter in Houston looking to do a human interest story. So, she picked a young black mother with kids in tow… because diversity. Except it didn’t go the way she thought it would. This mother nailed CNN and this reporter for being thoughtless and clueless. She used the ‘f’ word liberally here. She’s crying, scared and shivering. I don’t blame her for smacking this reporter around.

The mother’s name is Danielle. She waited with her children for 36 hours to be rescued. They hung up a sheet and no one came. She had to wade through four foot-deep water to get food for her children. After days with no food or electricity, she took the children and they made it to a gas station where they called a cab for her that took them to a shelter.

Flores then tried the personal touch and laid her hand on Danielle’s arm. She then proceeded to keep interviewing her about saving them from the floods. That’s when Danielle lost it and let Flores have it with both barrels. “We walked through four feet of water to go get them food on the first day. Yeah, that’s a lot of s***,” Danielle said. And then she really turned her anger on full blast at the CNN reporter. 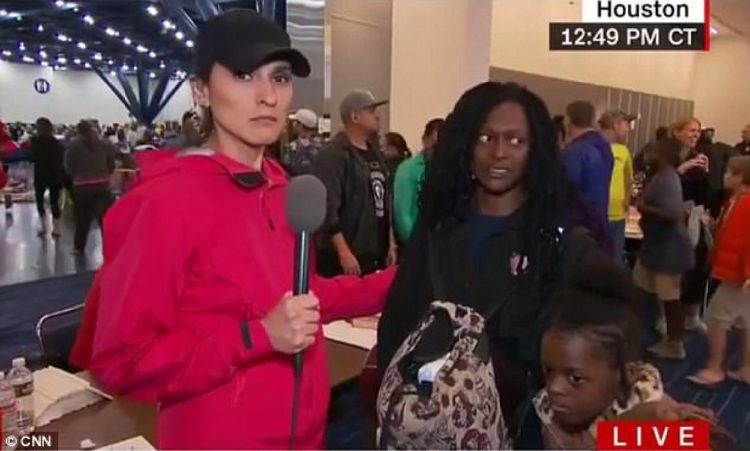 A Houston mother shouted at an interviewer live on television for her coverage of Hurricane Harvey victims.

The woman, named Danielle, had just arrived at the shelter after waiting 36 hours to be rescued from the floodwaters with her two children.

She and her kids were still wearing their bags and backpacks with their belongings inside.

As CNN correspondent Rosa Flores asked Danielle several questions, the woman appeared to become more upset, eventually shouting at Flores for interviewing people ‘during their worst times’, before she turned and walked away with her children.

The exchange was captured on live television before cameras cut back to Jim Acosta in the studio.

The interaction began with Flores standing beside Danielle at a shelter in Houston, where Danielle and her children had just recently arrived.

Danielle was shivering and looked visibly distressed as she stood with her young daughter and her young son peeked out from behind her.

Flores asked how she was rescued and Danielle explained that she and her family had been waiting for 36 hours at their home for police to come help them.

“But y’all sitting here, y’all trying to interview people during their worst times. That’s not the smartest thing to do. Like people are really breaking down and y’all sitting here with cameras and microphones trying to ask us what the f*** is wrong with us.” What the hell is wrong with this reporter? Can’t she see the poor woman is distraught? She’s terrified for her children and you put a microphone in her face? Shame on you. You could have at least brought some blankets over to warm her and the kids up and tried to help them before trying to use them as a media prop.

Danielle actually started screaming at Flores who said, “Sorry, I’m so sorry.” She looked like a deer caught in the headlights. But she just kept on trying to do the interview. Danielle bluntly laid it out: “And you’re really trying to understand with the microphone still in my face with me shivering cold with my kids wet and you still putting a microphone in my face.” Shivering and weeping, Danielle turned her back on the reporter and left her there not knowing what to do. They cut away to Acosta as fast as they could. Not fast enough… what an embarrassing fail by CNN.