Coulter: Donald Trump Has a Better Chance of Defeating Hillary Than Jeb or Rubio [VIDEO]

Coulter is right on this.[1] Hannity is out of line. All I’ve heard on Fox News lately is this stampede to disparage Donald Trump. It’s infuriating and depressing. Americans are boiling over with rage in regards to illegal immigrants and so-called refugees being brought into our country. A moron can see it is a silent coup. I don’t always agree with Coulter, but when she’s on target, she’s absolutely brilliant and brutal. The RINOs and the elites are scared crapless over Trump and Cruz. They know that mainstream America supports them and what they stand for. Can’t have that, now can we boys? Rubio and Perry are being totally opportunistic over Trump’s remarks – demanding he bow out of the race. Both of them have been for Amnesty and worse. Both are self-serving, willing tools of Progressives on the Right. It’ll take a lot more than a bunch of screaming, right-leaning hacks to make Trump reconsider running. The country is dying for someone who tells it like it is and that is exactly what Donald Trump is doing. It’s long, long overdue. 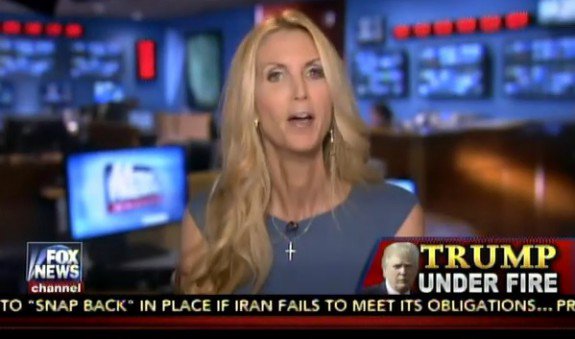 From the Gateway Pundit:

Look the country is boiling with rage over immigration and everyone, the elites are trying to destroy Trump because he’s injected it into the campaign now… I think the issue that has been at the very heart of his campaign is immigration and the rest of these Republican midgets jumping on this one flip remark when they have said things far worse. Perry talking about how he can’t build a fence because I’ll show you a ladder. That’s his approach to a serious issue? The new litmus test for real conservatives is immigration… I promise you Jeb or Rubio are going to lead to a Hillary presidency or Rick Perry.

Coulter is also right that if you run a Jeb Bush, Marco Rubio or Rick Perry… you are ensuring that either the Hildebeast or Socialist Sanders will ascend to the presidency. If that happens, kiss the country goodbye. Coulter’s choice of candidates in the past has been unpalatable to me… between Mitt Romney and now Chris Christie, it makes me queasy. I supported Romney out of sheer desperation. Never again. Christie is a Progressive on the Right and has all the markings of a fascist. Trump, as imperfect as he is, right now, in this race today is standing for what we need. We can either pick to death the good candidates we have and bow to the Marxists, or we can start supporting them enthusiastically and take our country back. Trump is a scrapper – I like that. Give it your best shot, Donald.