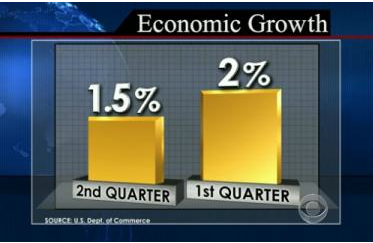 President Obama’s failed policies has yielded more disappointment. : The : American economy only grew a meager 1.5% in the second quarter and we still have unemployment above 8%. : As opined today by Mort Zuckerman of U.S. News and World Report[2]:

The unemployment rate under President Obama has averaged over 9 percent. Under George W. Bush, his predecessor, the jobless rate averaged 5.3 percent and was at 6.8 percent in the month his party lost the 2008 election. Job seekers are only one third as likely to find a job as before Obama was elected. A record number have been out of work for over six months. Hiring plans have sunk to the lowest reading since the third quarter of 2009, and only 26 percent of American companies plan to boost their compensation, the lowest since the depth of the last recession, as reported by David Rosenberg,: chief: economist: of Gluskin Sheff.: Today a record number of households have at least one member looking for a job. The average private sector workweek is 34.5 hours.

Furthermore, Zuckerman noted that “all the net jobs created during the Obama administration have been part-time jobs. An estimated 35 million Americans are trapped in jobs they would have left in better times. Fewer Americans are working today than in the year 2000, despite the fact that our population has grown by 31 million and our labor force by 11.4 million since then.”

Yet, the media is mum on this subject. : Julia Seymour of the Media Research Center stated today that[3]:

ABC, CBS and NBC news programs ignored the falling GDP numbers for six straight months from Jan. 28 to July 26, 2012, according to Nexis transcripts. In 2012, the only coverage on the morning and evenings shows was three stories on Jan. 27, and two more about the “dismal” report on July 27, 2012. But for the six months in between, the network new programs had nothing to say about the economic growth rate even though it was falling.

In prior years, including 2009-2011, the networks didn’t hide from reporting and spinning the gross domestic product announcements. In July 2009, Katie Couric called a -1 percent GDP estimate “the latest evidence the recession is easing”[4]: the same night ABC anchor Elizabeth Vargas found “new optimism about an economic recovery.” Two years later, in July 2011, an: anemic 1.3 percen[5]t GDP rate was used to justify a debt ceiling deal.

According to the Commerce Department, GDP is “The market value of goods and services produced by labor and property in the United States regardless of nationality.” Investopedia said it is: “one of the primary indicators used to gauge the health of a country’s economy.”[6]

That importance hasn’t translated into much news coverage. In fact, one of the three networks ignored the important GDP announcement July 27 that showed the economy continued to slow — to a very weak 1.5 percent in the second quarter. That night CBS “Evening News” reported that “The U.S. economy slows sharply, raising the risk of a new recession.” NBC also aired a report that evening about the weak data, but ABC: ignored the story[7]: — preferring to tout a “giant rally on Wall Street,” cover Michelle Obama’s “Let’s Move” campaign in London, and mention a study that proved the “five-second rule” is wrong instead.

Alas, the Democrat Media Complex at work omitting stories that will hurt the president because, as: Bernie Goldberg predicted[8], “they: want President Obama to be reelected. As simple as that”