Down Economy: America’s ‘Oldest Family Farm’ Up For Sale 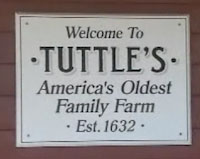 In a sign of these dismal times, the oldest family farm in America is up for sale because its owners just cannot survive this down economy. After 378 years of contiguous family ownership and operation, the Tuttle family of Dover, New Hampshire is selling its 134-acre farm.

Founded in 1632 by John Tuttle fresh off the boat from the Old World, the Tuttle family farm has moved on with the times, improved and changed to continue operating. But, at long last, this economy is too much for them to bear.

Curiously, the Associated Press[1] worked very hard to downplay the economic side of this argument in its coverage and instead played up the fact that the Tuttles are aging and have decided to discourage their own sons from taking up the family business. The APs story also turned the focus away from the bad economy and toward blaming WalMart and the “growth of supermarket chains.”

But despite the AP’s attempt to obviate the economic angle, other stories out there have properly reported this important reason why the Tuttles are selling off their legacy.

The local Dover paper did not ignore the harsh economic impact on the Tuttle’s farm in its coverage. “The business recently had to cut back on its inventory due to the economy, another large deciding factor for the sale, said Tuttle,” Dover’s Fosters Daily Democrat reports[2].

The Tuttles are afraid that the debt they’ve incurred with the farm will be too much for their children to settle once they pass on and that had a lot to do with the decision, too. As the Daily Democrat reports:

She said the sale isn’t a way for the family “to get wealthy,” but rather a way to “settle our debt” and give way to younger people with fresh ideas and capital to make it “a successful farm.”

The Boston Herald also properly reported[3] the economic troubles that the Tuttles were having which played a large part in their decision to sell off the long-time family farm.

The farm was turning a small profit until the recession, the Tuttles said. But in the past three years, as families looked for ways to pare spending, business has faltered.

“Since the economy turned, we’ve been losing,’’ said Michelle Tuttle, 43.

Also in its story, CNN’s Mary Snow noted[4] that the economy was a motivating factor for the Tuttle family to sell. “Unlike the days his grandfather delivered vegetables in a truck,” CNN reported, “this farmer Tuttle needs to run a year-long store to make enough money. But unlike his predecessors, he competes with supermarket chains and WalMart. The recession he says has taken a significant toll.”

It is a sad chapter in America when we lose such legacies. This economy is seeing this a lot, unfortunately. The business climate in this country is at its worst state since the second most socialist president we ever had led a crusade against “fat cats,” and “speculators” back in the late 1930s and early 1940s.