FAKE NEWS! While CNN is LIVE On Air, Kids TROLL Them – You’ve Got to Watch This!

CNN has been having a rough time of it ever since Donald Trump got elected. Their ratings have been down and they’ve been sidelined in the White House press pool. They’ve also been slammed with the label of “fake news” — and they just got epically trolled[1] during the White House Easter Egg roll. 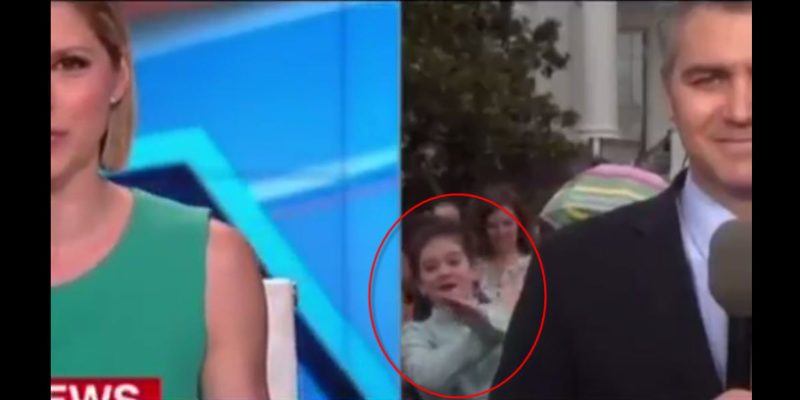 CNN reporter Jim Acosta was reporting live from the White House, with crowds of children behind him. Acosta was discussing Vice President Mike Pence’s recent trip to North Korea when a child appeared from behind Acosta, photobombing him. But it gets better.

The kid appears to mouth the words “fake news” live on the air.

This isn’t the first time Acosta has had the embarrassment of a “fake news” label; in January, shortly before being sworn in, Donald Trump reacted harshly when Acosta interrupted a question, saying, “Your organization is terrible… you are fake news!”

Acosta was speaking with CNN anchor Kate Bolduan when the epic photobomb happened. Bolduan was trying to explain the difference between the tense situation in North Korea with the seeming frivolity of the Easter Egg roll. “The juggling act that every president has to do and taking questions on North Korea as tensions rise there and presiding over, as I said, the least tense — or should be — of presidential duties, the Easter Egg Roll,” Bolduan was saying. Acosta was listening intently and didn’t notice the child pop up behind him and mouth “fake news,”

That one really had to hurt. But then, what is to be expected? The mainstream media has not been shy about their liberal bias, openly promoting liberal policies and candidates non-stop. It’s no surprise that Americans don’t trust the media anymore. Why would they? They can’t expect to get an unbiased report of what’s happening from an outlet like CNN. If that’s not fake news, then what is?