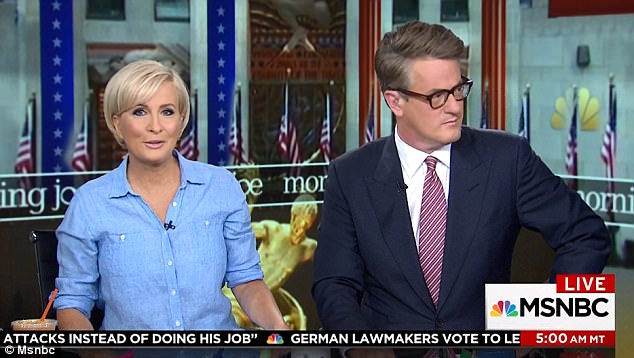 The saga continues! Trump is refusing to back off of his comments about MSNBC hosts Joe Scarborough and Mike Brzezinski showing up at Mar-A-Lago for New Year’s. And it looks like Donald Trump doesn’t have the time to care much more about this whole brouhaha, especially considering his renewed focus on immigration with the Executive Order known as Kate’s Law.

As reported in the Daily Mail[2]:

‘We are both certain that the man is not mentally equipped to continue watching our show, “Morning Joe,” they said in a Washington Post op-ed on Friday morning.

According to their account in the Post, Trump invited them to Mar-a-Lago for dinner. When Brzezinski didn’t show, he asked them back the next night on, New Year’s Eve.

They went – but did not attend the party he was having that night, they maintained.

Despite not being booked for the show that day, putting their July 4th vacation off by a day, the pair had some comments on the tweets[3]:

Brzezinski says they met privately with Trump and his wife in a bedroom and were led out through the party. ‘Talk about facelifts – woah, Palm Beach!’ she said.

The 50-year-old television host proudly talked about her chin tuck and declared: ‘It looks awesome.’

They also claimed on the show, and in the Post, that senior Trump officials begged them to call the president and apologize for their coverage or have a nasty piece on them run in a tabloid that’s owned and operated by the president’s friend.

Watched low rated @Morning_Joe[4] for first time in long time. FAKE NEWS. He called me to stop a National Enquirer article. I said no! Bad show

At least this has been a boon for policy watchers who get to see a meltdown from almost every single official, reporter and actor in the country.

Moral preening on Twitter was even pumped out by the Republicans, like Sen. Ben Sasse from Nebraska and Senator Lindsey Graham.

Please just stop. This isn't normal and it's beneath the dignity of your office.

Mr. President, your tweet was beneath the office and represents what is wrong with American politics, not the greatness of America.

Other media personalities have been piping up, including Jake Tapper from CNN.

This reminds me: how is @FLOTUS[8]'s campaign against cyber-bullying going? https://t.co/X4xmyreGLH[9]

Somehow, I doubt that Trump will ever care.