Fox News Producer Jesse Watters Tried to Report From Inside The Texas Muslim Convention. Take a Look at What Followed.

Wow, just wow[1]. You need to watch this video – it pretty much says it all. They wouldn’t let Jesse Watters of Fox News in because he wasn’t the ‘right kind of media.’ Right – Islamo-fascist much? And no media was allowed in there past the first 20 minutes. They had radicals in there preaching Shariah Law and suspected terrorists were freely given the podium. You had young men and women defending barbarity in the name of the Quran and proselytizing to Watters. And I didn’t hear one of them denounce Jihadist violence and murder. To not stand is to stand. 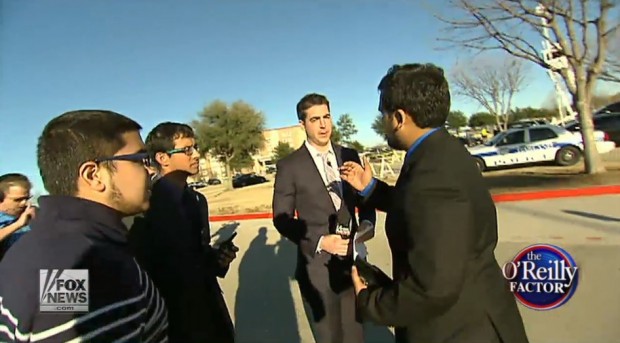 Fox News producer Jesse Watters attempted to report from inside a Muslim conference that took place near Dallas, Texas, over the weekend, but was denied entry.

“Did you fill out the media form?” a man appearing to be an organizer asked Watters outside the ”Stand With the Prophet” event.

“Yeah, I filled out the media form and I bought tickets too, personally,” the Fox News producer replied. “And now they’re saying I can’t go in.”

“There’s a certain type of media allowed,” the man replied to Watters.

“I thought this was supposed to be open press and I came all the way down here from New York,” Watters countered as the man walked away.

Seeking to get more answers about why Fox News couldn’t enter a conference center owned by a local school district, Watters spoke with a police officer.

“They rented it out,” the unidentified officer replied.

After appearing to report outside the conference center for hours, Watters reported that organizers eventually told him they “specifically barred ‘The O’Reilly Factor’ from coming inside.”

Garland, Texas has a major problem. That was a public convention center and they should not have been able to keep the media out. Looks like they suspended Constitutional rights in favor of Islam. Just sayin’. You had a ton of cops there and a SWAT team – not to protect Americans against Islamic terrorists… oh no. They were attending the conference. No, this was to protect potential Muslim victims from the Tea Party. What a joke and just how ass backwards can you get? The guys Watters talked to bore a strong resemblance to the Nation of Islam, folks. And of course, CAIR was running everything. Talk about a No-Go Zone.