Gawker Wants Us to ‘Sympathize’ with Pedophiles 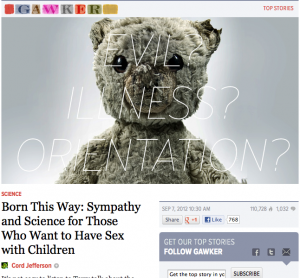 Cord Jefferson’s: September 7 column[2]: on Gawker should churn your stomach. : He wrote about how some consider pedophilia a sexual orientation and how it deserves public sympathy. : The first sentence stopped me cold — “it’s not easy to listen to Terry talk about the time he had sex with a seven-year-old girl.”

The third time Terry masturbated in front of his niece, he did it while she was in the room, and he played a pornographic movie on the TV. ‘Do you want to try what they’re doing?’ he asked her, motioning to the woman riding the man onscreen. His niece said yes, and she took off her shorts before straddling him. To avoid getting too graphic, Terry said he knew almost immediately that he was going to injure the girl if he went any further–”she was so small,” is how he puts it. ‘That’s when the reality clicked in and I grabbed her and lifted her off of me and sat her next to me on the couch,’ he says. ‘I got up and walked out of the room saying, ‘Lord, what am I doing! Lord, forgive me for what I have done!’

Yes, pedophiles are the new class of folks progressives want to mainstream in America.

He laments how hard pedophiles have it in America. : Given the fact that “there’s the problem of finding homes for pedophiles who are arrested and eventually put back into communities. In Florida, where Miami-Dade County has grown increasingly restrictive about where people who commit sexual crimes can live, the department of corrections once housed a small group of pedophiles under a bridge,: like real-life trolls[3].”

ABC News article from 2003[4], [where] a corrections officer from Los Angeles told reporter Michael S. James that imprisoned pedophiles “usually don’t make it” without protective custody. Leslie Walker, a prisoner’s rights activist, told James, “[Child sex offenders] are at risk of being murdered, having their food taken, having their cells defecated and urinated in. Their life is truly a living hell.” Good, most people will say. But there is a growing number of researchers, many of them out of Canada, whose work suggests that pedophilia is an illness deserving of the public’s sympathy the way any brain disorder is. Some of the scientists say pedophilia is a sexual orientation, meaning that it’s unchangeable, regardless of how much jail time or beatings or therapy someone is dealt. Others have reason to believe that pedophiles are born that way, and that some of them will suffer through entire lives without hurting a single child. If this research proves to be correct, it should help shape both our public policy and our public attitude, so that we’re protecting kids while also protecting pedophiles from angry mobs, cellmates, and themselves.

We all know prison is tough. : Not that it’s the most accurate representation, but does anyone remember the show: OZ[5]? : But, let’s focus on the science part of this statement.

Last February, Jefferson wrote that “Dr. Vernon Quinsey, then of Queen’s University, and Dr. Hubert Van Gijseghem (pronounced HI-sheh-hem), who was retired from the University of Montreal, testified before the Canadian Parliament’s ‘Committee on Justice and Human Rights[6].’ The topic of the day was mandatory minimum sentences for people convicted of sexual offenses against children….Dr. Van Gijseghem, stood out:

Dr. James Cantor is the Head of Research in the Sexual Behaviours Clinic at the Centre for Addiction and Mental Health, Canada’s largest mental health and teaching hospital….he’s been working on better understanding pedophiles for about 12 years now using a variety of methods. In the Kurt Freund Phallometric Lab, Cantor and his colleagues can attach an instrument to sex offenders’ penises in order to gauge their responses to a variety of sexually charged images. The Freund lab, Cantor tells me during a phone call last week, is one of the few in the world that can measure increases in penis volume rather than just increases in circumference.

Does this sound like the kind of research you want funded by your taxpayer dollars?

Cantor’s work also focuses on running sex offenders through what he calls ‘a battery of neuropsychological exams,’ and brain scans on top of that, thus providing one of science’s most well-rounded looks at how a pedophile is made. That there are a lot of unanswered questions in Cantor’s field of research can’t be overstated, but his initial findings are noteworthy.

I’ll let you determine the findings on your own — if you wish to read the whole piece — but it’s all interwoven into a narrative that trivializes child rape. : The most egregious paragraph prefaces the scientific studies with: Jefferson writing: “imagine a world in which admitting your attraction to busty women or tall men led to alienation, jail time, or your murder. Older gay men can probably remember such an era, but nowadays most sexual appetites have been mainstreamed to the point of banality. Pedophiles, for obvious reasons, don’t enjoy the same kind of tolerance, and thus it seems as if they may be locked forever in a sexual prison from the moment they’re born.”

Sexual appetites involving children should be mainstreamed? : In addition, the keywords in the first sentence are “men” and “women” — not “boys” and “girls.”

Of course, Jefferson had to go to Canada to contrast our societies. : Canada being filled with awesome scientific Canucks, while America is dominated by mean and nasty folks who are intolerant of people attracted to prepubescent children and want to have sex with them. : It’s a disproportionate response — for a liberal.

He uses Jerry Sandusky as an example to convey that point.

When Penn State football coach Jerry Sandusky was arrested last year and charged with 52 counts of molesting young boys, America’s universal hatred for pedophiles was once again put on prominent display. A society is defined by what it despises as much as what it loves, and though the United States has a history of a great many scorned communities, none is as broadly reviled as men who have sex with children.

How should have we reacted? What would have been the appropriate response? :  A box of chocolates? : Not to mention, that Sandusky’s rapes went deeper — it permeated the entire Penn State administration who felt that Joe Pa, the program, and the school would be better to just ignore or take de minimis actions to remedy the problem.

However, some nations, like Germany and Canada, aren’t taking de minimis actions to help pedophiles. : They have call centers for these people.

…in Germany there is Prevention Project Dunkelfeld, an organization that, like a suicide hotline, offers free counseling to anyone struggling with thoughts of molesting a child. “Dunkelfeld” translates to ‘dark field,’ and PPD’s founders say their goal is to make sure pedophiles come out of the shadows and get the help they need before they offend. A sample PPD tagline is representative of the kind of sympathy with which it approaches the problem: “You are not guilty because of your sexual desire, but you are responsible for your sexual behavior. There is help.”

Canada, too, has Circles of Support and Accountability, an association of volunteers who are advised by professionals on how to help convicted sex offenders reacclimate to society. While some COSA programs are beginning to pop up around the States, we have not nearly as many as our northern neighbors, who originally concocted the COSA model.

However,:  what is preventing “America’s progress [in the realm of pedophile tolerance] are our ‘mandatory report’ laws, some of which say that therapists are required to contact authorities if they have even a “reasonable suspicion” that a child is being mistreated somewhere.” : Jefferson uses: ”California’s mandatory report policy: [as an example, which ]: says: very openly that ‘no evidence or proof is required prior to making a report’ [PDF[8]], making it perfectly acceptable to call the cops on a person solely for talking about sexual fantasies regarding children. Naturally, to avoid this alarmist scrutiny, most pedophiles sit silently on their secret desires, which is at best unhealthy for them, and at worst dangerous for children.”

In this effort to curb possible threats to children — not to mention very awkward dinner conversations — it maybe detrimental to pedophile tolerance since it will drives them underground. : Yet, to the progressive mind, “if we can get pedophiles to begin acknowledging their dangerous desires, experts like Dawn Horwitz-Person, a psychotherapist in Chico, California, who specializes in treating sex offenders, believes we can help pedophiles “learn how to manage their desires the way alcoholics do.” : So, when does Pedophilia = alcoholism?

Granted, I’ve written some explosive and admittedly inappropriate pieces in the past, but this is something on an entirely different level. : To say that pedophiles are a new class of discriminated citizens that deserve our sympathy, is flat out wrong. : They are rightfully vilified because no rational individual thinks that: : raping children is an appropriate form of social interaction. : Call me crazy, but pedophilia isn’t the same as alcoholism because the level of damage inflicted on yourself and others isn’t commensurate to raping a child.

Gawker has taken progressivism to a new dangerous and pernicious level.