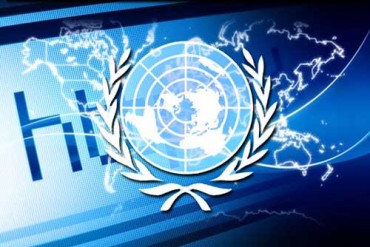 Another Friday, another violation of American freedoms and rights. This one is personal. Today, ICANN and the US government announced their intention[2] to relinquish control of the Internet to the UN by 2015. Where’s Congress? Where’s the outrage that should be thunderous over this travesty?

U.S. officials announced plans Friday to relinquish federal government control over the administration of the Internet, a move that pleased international critics but alarmed some business leaders and others who rely on the smooth functioning of the Web.

Pressure to let go of the final vestiges of U.S. authority over the system of Web addresses and domain names that organize the Internet has been building for more than a decade and was supercharged by the backlash last year to revelations about National Security Agency surveillance.

The change would end the long-running contract between the Commerce Department and the Internet Corporation for Assigned Names and Numbers (ICANN), a California-based nonprofit group. That contract is set to expire next year but could be extended if the transition plan is not complete.

We are handing over the Internet to THE most incompetent and evil body on the planet. It is ruled by Islamic dictators and Communists. John D. Rockefeller was all giddy over the prospect, he called the move “consistent with other efforts the U.S. and our allies are making to promote a free and open Internet, and to preserve and advance the current multi-stakeholder model of global Internet governance.” That ought to chill you to the bone right there. Handing the Internet to the UN paves the way for global government and Rockefeller knows it.

Newt Gingrich was a lone voice of sanity on this issue — here’s his tweet on the subject:

“What is the global internet community that Obama wants to turn the internet over to? This risks foreign dictatorships defining the internet.”

Indeed it does. It threatens free speech and every other Constitutional right we now have. All of this is being done using NSA spying as an excuse. Out of one side of the collective Progressive mouth comes the denials that this has anything to do with NSA spying. Out of the other, comes the placating narrative that this will ease the global concerns over NSA spying. Let me ask you this… what if the whole point of Edward Snowden being at the NSA was to facilitate this? What if the leaks about spying from the NSA (an organization that needs severe housecleaning to be sure), was a basis to further the global oversight of the Internet? Once again, we’ve been had and we fell for it. But handing the Internet over to the UN overlords is just the first shoe to drop. There will be others.

The United States has long maintained authority over elements of the Internet, which grew from a Defense Department program that started in the 1960s. The relationship between the United States and ICANN has drawn wider international criticism in recent years, in part because big American companies such as Google, Facebook and Microsoft play such a central role in the Internet’s worldwide functioning. The NSA revelations exacerbated those concerns.

The next shoe to drop comes to us from The Daily Caller. This move opens the door to a global Internet tax, probably beginning with domains. The power to tax, is the power to control — globally. Any control America had over the UN is now gone with this move and we have made it possible to institute a global government. It’s the ultimate shell game for a UN coup of the US’ power. And it took someone from within to facilitate the move[4] – Barack Obama and the Progressive enemies within:

The U.S. government’s plan to give away authority over the Internet’s core architecture to the “global Internet community” could endanger the security of both the Internet and the U.S. – and open the door to a global tax on Web use.

“U.S. management of the internet has been exemplary and there is no reason to give this away – especially in return for nothing,” former Bush administration State Department senior advisor Christian Whiton told The Daily Caller. “This is the Obama equivalent of Carter’s decision to give away the Panama Canal – only with possibly much worse consequences.”

The U.S. Commerce Department announced late Friday[5] it would relinquish control of The Internet Corporation for Assigned Names and Numbers (ICANN) – the organization charged with managing domain names, assigning Internet protocol addresses and other crucial Web functions – after its current contract expires next year.

“While the Obama administration says it is merely removing federal oversight of a non-profit, we should assume ICANN would end up as part of the United Nations,” Whiton said. “If the U.N. gains control what amounts to the directory and traffic signals of the Internet, it can impose whatever taxes it likes. It likely would start with a tax on registering domains and expand from there.”

It doesn’t end there. No, that is just the beginning. This is also a national security threat. What if the UN didn’t like the actions of the US? A common occurrence. Would we lose our Internet access? Could someone shut down our power grids? Take over our government? Our enemies would have almost full access. Forget about stopping cyber attacks. We would be facilitating them through the UN. This has intellectual property, economic, national and international security implications.

A last chilling quote from Whiton:

“Under invariably incompetent U.N. control, it could mean a hostile foreign power disabling the Internet for us,” Whiton said.

All in the name of protecting us from terrorism. How is it we have come full circle since 9-11… from hardening our defenses to protect the US from foreign attacks, to handing her to foreign enemies?

The US sycophants of the Progressive agenda are lining up and Verizon and other big business leaders are at the head of the line:

“This is a step in the right direction to resolve important international disputes about how the Internet is governed,” said Gene Kimmelman, president of Public Knowledge, a group that promotes open access to the Internet.

Verizon, one of the world’s biggest Internet providers, issued a statement saying, “A successful transition in the stewardship of these important functions to the global multi-stakeholder community would be a timely and positive step in the evolution of Internet governance.”

There are a number of US officials[6] who have been ringing warning bells over the dangers of ceding ICANN’s authority to the International Telecommunication Union[7], which is a UN agency. There are fears, and justifiably so, that enemies such as Russia, China and Iran could use this move to implement online censorship. Congress, in 2012, unanimously passed a resolution stating the US’ commitment to keeping the Internet free of government control. But the Progressives don’t give a crap about Congressional oversight. They care about power and globalism. They are Marxists, what do you expect? If they could, they would hand the US to our enemies post haste. Meanwhile, this is dumped on Americans again during multiple conflicts and emergencies. This time, we have a brewing war in the Ukraine, revolution in Venezuela, nukes in Iran and a missing Malaysian airliner. Distract and conquer rides again.

Americans For Limited Government[8] had this to say about handing the Internet over to our enemies at the UN:

“Congress needs to prevent the Obama Administration from giving away U.S. control over the Internet to any international body. To allow the free speech rights of U.S. citizens to be threatened by international bodies that don’t recognize these fundamental rights is dangerous and a threat to our national sovereignty. Perhaps this latest egregious action by the Obama Administration in their quest to deconstruct the United States will finally wake Congress up to their power of the purse responsibility as a co-equal partner in government.”

USAHitman has a great piece[9] on all of this, They are ringing the warning bell on tyranny at the UN:

Analysts, however, said the UN plot to take over the Internet and expand its powers has essentially nothing to do with either terror or propaganda. Instead, critics of the scheme argued, the establishment is getting nervous about the Internet – possibly the final bastion of true free speech in the world – and is working to crack down on it now, before the people of the world wake up and remove the shackles of tyranny.

“The powers-that-be have decided that they need to track user details on the Internet to prevent crime…. The ultimate goal is world government and it is being built via ever-more authoritarian means,” noted[10] analysts at the liberty-minded Daily Bell, which has been vigorously defending Internet freedom as the potential key to advancing human freedom throughout the world.

In essence, then, the UN hopes to facilitate tyranny. “What we call the Internet Reformation has made it more difficult for the power elite to utilize dominant social themes – fear-based promotions – to frighten middle classes into giving up wealth and control to globalist institutions like the UN,” the analysts observed. “As a result, the elites wish to attack and control the Internet.”

Heavyweight defenders of free speech and an open Internet, however, insist that the fight must go on. “For the first time in human history, supporters of liberty around the world can share information across borders quickly and cheaply. Without the filter of government censors, this information emboldens millions to question governments and promote liberty,” wrote[11] Rep. Ron Paul (R-Texas), a hero to freedom activists around the world. “This is why liberty-minded Americans must do everything possible to oppose – and stop – government attempts to censor or limit the free flow of information online.”

While the coalition of communist and Islamist tyrants try to rein in Internet freedom at the global level[12], the United States has also seen an unprecedented federal assault on the open Internet as well. The Department of Justice, various special interests groups, and lawmakers in both parties, for instance, have been fiendishly working to adopt everything from a federal “cybersecurity” regime to data-retention schemes similar to the plan outlined by the UN.

For Internet freedom activists, though, government regulation or control of the Internet is off the table and non-negotiable. First of all, the U.S. Constitution does not allow even the federal government to regulate the Web, much less the UN; and if either gets its foot in the door, restoring liberty online would be extremely difficult. Even if it were constitutional, however, activists say letting any government regulate the Internet would be a terrible idea for numerous reasons.

Right they are, but their admonishments seem to be falling on deaf and clueless ears. Have you noticed, it always comes back to the Communists and the Islamists? They are attempting an evil global coup. The Obama Regime is giving away our liberty[13]. Will it just quietly happen while we all sit here? It happened to the Germans, it can happen to us. This is the worst thing Obama has done to date. I thought for sure that this would get America up in arms. Not so far, not even close. I would remind Americans that the first thing done when conflict breaks out, or a regime wants to silence its masses, is to clamp down on the Internet. We have just handed the greatest force for freedom and liberty on the planet to dictators. The freest nation on the planet created the Internet[14]. Now the most oppressive ones will silence it. Contact your Senators and Congressmen and fast.

Obama and the Marxists have just handed Internet control to our enemies – they have given them the keys to the kingdom that now dominates virtually every aspect of our lives and our freedoms. Free press and bloggers, such as myself, will be controlled, regulated, penalized and shut out. A new world government headed by the UN will take complete control, unless we stop this takeover from the enemies within[15] and without.