I’m stunned as well[1]. I have no love lost for John McCain, but he gets it right here and good for him. McCain is right… we should be giving weapons and munitions to the Ukraine. Instead, Obama utters useless prater and sends them blankets. He says he’s supporting the Ukraine with his right hand, while making it possible for the Russians to demolish them and take their country with the left. I have never believed any of Obama’s so-called tough talk against Russia. I think he’s locked at the hip with Putin. At least McCain is man enough to say he’s ashamed of how America has behaved and that he hasn’t done enough. Most of these corrupt politicians won’t even go that far. The fall of the Ukraine marks the beginning of World War III and our leaders just can’t seem to be bothered. 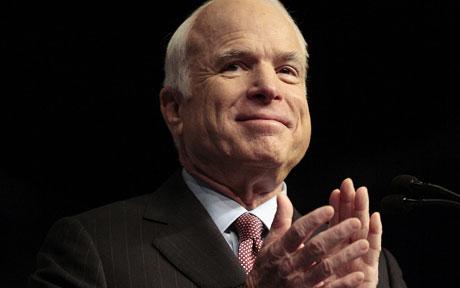 He’s known for his military service and his long years in government — and he just said something that a veteran Washington reporter has never heard him say before.

McCain said it’s disgraceful that the international community, especially the United States, hasn’t done more to aid the people of Ukraine[2] as they face not-so-covert aggression from neighboring Russia.

“The Ukrainians aren’t asking for American boots on the ground, that’s not the question here,” McCain said. “They’re asking for weapons to defend themselves and they’re being slaughtered and their military is being shattered.”

McCain also labeled the leaders of France and Germany shameful for “legitimiz[ing], for the first time in 70 years, the dismemberment of a country in Europe.”

“Well I’ll say this, senator,” said host Bob Schieffer. “I’ve known you for a long, long time, interviewed you many, many times. I’ve never heard you say, ‘I’m ashamed of my country,’ which you just said.”

The Ukrainians are capable of fighting for themselves – but artillery is very, very costly. As their ally, we are supposed to step in and protect them as is Europe. It’s as if the world is gifting the Ukraine back to Mother Russia. Do you really think that Putin will stop there? Not a chance. Just look how he is forging ties with Cuba, Venezuela and Nicaragua. The US should be very, very vigilant against the Russian bear moving in next door[3]. In Europe, Germany and France are acting like craven cowards… crawling into bed with what they consider a strong man. At this rate, Europe will be lost before they even begin to fight. Churchill must be rolling over in his grave. Tragic.