Levin to Hannity: Trump gets it RIGHT concerning anchor babies & here’s WHY [Video]

Listening to the so-called conservative talking heads[1] on Fox News and other outlets, as well as pundits on blogs who supposedly support the Constitution, their lack of constitutional understanding is embarrassing. Mark Levin could not make the case any clearer than he has that nowhere in the Constitution does it say that the children born in the U.S. to illegal aliens are automatic citizens. It doesn’t and not only that the Civil Rights Act of 1866, which was written in conjunction with the Fourteenth Amendment, definitely states that in addition to being born on U.S. soil, children of former black slaves could not be ‘subject to any foreign power.’ That’s pretty clear and definitive. Children of illegal immigrants are absolutely subject to a foreign power – the one that their parents come from. The Supreme Court has never ruled that the children of illegal aliens are American citizens. Even if they had, it would be wrong. The Supreme Court is not infallible. The Congress can cut through all this bull crap and has the ultimate power here. They can regulate immigration and put a stop to this immediately. 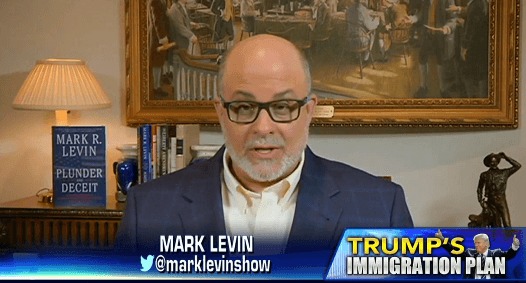 Bestselling author and radio host Mark Levin jumped into the middle of the national feud over “birthright citizenship” Wednesday, taking sides with Donald Trump’s plan[3] to end automatic citizenship for those born in the country to illegal aliens.

Critics of Trump’s plan to “change the standards” of the 14th Amendment call it unconstitutional. Levin disagrees, and told Fox News’ Sean Hannity Wednesday that Article 1 Section 8 of the Constitution gives Congress ultimate power to regulate the immigration process.

Levin said that nowhere in the Constitution does it say that the children born in the U.S. to illegal aliens are automatic citizens. He also noted that the Supreme Court has never ruled as such.

He said, “Congress, not the courts, not the president, not ICE,” has the power to regulate immigration in this regard.

Levin was disgusted “to hear constitutional conservatives trip all over themselves to sound like liberals, to rewrite this provision.”

All this wailing that this is the way it’s always been done and it can’t be changed is just dishonest and corrupt. No other nation in the world allows this to go on. You are not a nation if you do not have secure borders. And coming across that border and plunking out a child should not entitle that child to automatic citizenship and all the adherent benefits thereof. Not to mention letting mommy and daddy stay and get a free ride. Over 400,000 anchor babies are born every year here in the U.S. now. That’s staggering. If you were going to conquer a nation from within, the easiest way to do so is breed the current population out. Just increase your numbers until you are the controlling majority. We are letting an invading force bludgeon us with our own Constitution. It’s insane and suicidal.