Liberal Media Rag Vox: Dogs And Other Domestic Animals Should Be Citizens…

Welcome to the theoretical logic of Cass Sunstein[1]. This is one of his lamebrain ideas as well. Sunstein notes that personhood need not be conferred upon an animal in order to grant it various legal protections against abuse or cruelty, even including legal standing for suit. In other words, animals should have the same rights as people do and the same standing. What’s next, the vote? I’m all for kindness towards animals, but they are not humans and therefore are not afforded legal standing the way people are. An animal is not a citizen, because they are not human.[2] 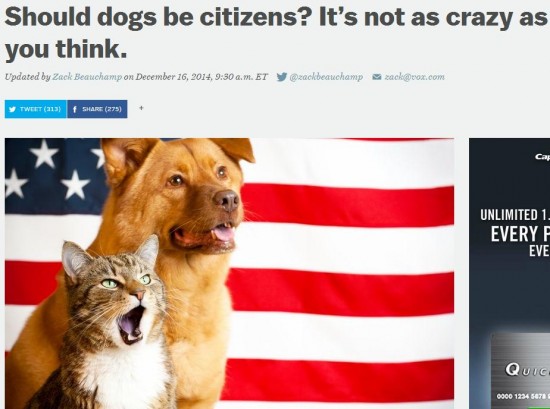 No, not a parody.

What if domestic animals — pets such as dogs and cats as well livestock like cows and chickens — were granted citizenship rights? That may sound like a crazy question, but Canadian philosopher Will Kymlicka thinks it’s a critically important one.

Kymlicka, a professor at Queen’s University, is a well-regarded figure in modern political philosophy. He’s also the author, along with writer Sue Donaldson, of Zoopolis, a book making the case for animal citizenship. Their basic premise is simple: animals are already part of our society, as pets and work animals, therefore we should formally recognize them as such.

That’s not just a head-in-the-clouds thought experiment. We already have basic laws forbidding animal abuse and regulating industrial slaughterhouses. But, as anyone who has visited an animal shelter or thought about the ethics of what they eat can attest, we as a society have not come anywhere close to solving the problem of animal mistreatment. If we really want to improve animals’ lives, Kymlicka and Donaldson argue, we need to stop thinking in terms of merely treating animals better. Rather, we need to acknowledge on a fundamental level that animals are a part of society and deserve to be treated as such. That leads you, however improbable it might sound, to citizenship.

According to Sunstein and the likes of Kymlicka, animals should be able to sue us and eating meat is akin to slavery. Rubbish. These same people are also typically Atheists and have no religion, therefore all of us are animals. If you believe in God and a soul, you know that is not true. God set man above the animals and gave him dominion over them. They serve man and can be his companion. Certain animals are also food. The Progressives are trying their darndest to blur the lines between species, nationalities, sexes – anything to bring us all into one big collective that can be controlled. They aren’t elevating animals – they are debasing humans.