To say that the relationship between the Trump administration and the media has been contentious would be an understatement. Deputy White House Press Secretary Sarah Huckabee Sanders was giving a press briefing Tuesday when tempers flared and one reporter completely lost his temper[1]. 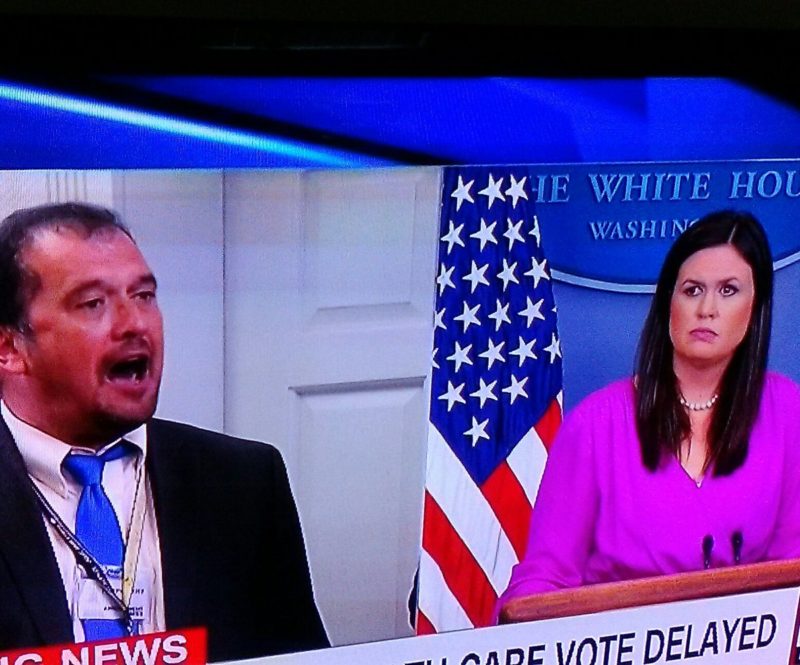 The argument started when Sanders, who was conducting the first televised press briefing in a week, slammed CNN for a retracted story that linked Anthony Scaramucci, a Trump ally, with a Russian investment fund. Three reporters were fired and Trump himself openly criticized CNN for it. During Tuesday’s briefing, Sanders piled on.

“If we make the slightest mistake, the slightest word is off, it is just an absolute tirade from a lot of people in this room, but news outlets get to go on, day after day, and cite unnamed sources, use stories without sources,” she said.

At that, Brian Karem, executive editor of The “Montgomery County Sentinel” exploded. “Dammit! Come on! You’re inflaming everybody right here, right now with those words,” he shouted. “This administration has done that as well. Why in the name of heavens?”

“If we don’t get it right, the audience has the opportunity to turn the channel or not read us,” he continued. “You have been elected to serve for four years at least. There’s no option other than that.”

“What you just did is inflammatory to people all over the country who say, ‘See, once again the president is right, and everybody else out here is fake media’,” he ranted. “And everybody in this room is only trying to do their job.”

In addition to serving as executive editor of the small Maryland paper, Karem also writes for “Playboy,” which quickly applauded his actions.

Our reporter @BrianKarem[6] stood up for free press today. This is why he did it. This is why we'll keep doing it. https://t.co/7kEWlJctBF[7] pic.twitter.com/chvRyUmTPk[8]

Sanders disagreed with Karem’s outburst, though. “I think if anything has been inflamed it’s the dishonesty that often takes place by the news media,” she retorted. “And I think it is outrageous of you to accuse me of inflaming a story when I was simply trying to answer [a reporter’s] question.”

Do you think Karem’s outburst was justified, or do you stand by Sanders?