In a stunning development first thing this morning, it was announced that Matt Lauer, the longtime host of the “Today” show, was being fired by NBC for “inappropriate sexual behavior.” I never saw that one coming and it came out of the blue today. “While it is the first complaint about his behavior in the over twenty years he’s been at NBC News, we were also presented with reason to believe this may not have been an isolated incident,” NBC News chief Andy Lack said Wednesday in a memo sent to employees shortly before the 7 am broadcast. Hoo boy. There is probably more to come on this scandal… a lot more.

The “Today” show anchor Savannah Guthrie reported the firing this morning. She told viewers they were “devastated” by the news and promised to provide more details when they were available. ‘We will be covering this story as reporters, as journalists,” she said. It looks to me as if NBC is capitalizing on their own scandal as news. Just pathetic. These people have no shame whatsoever. 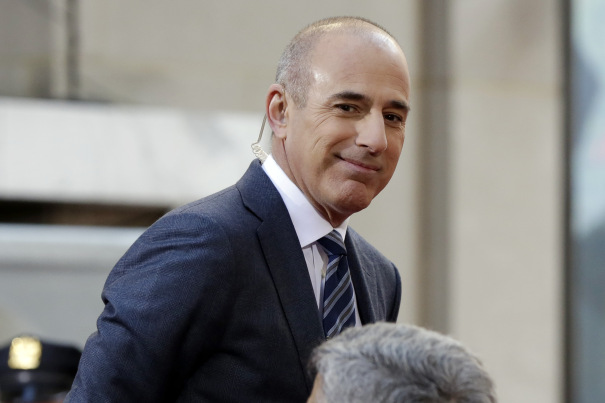 This follows as a number of high-profile journalists have been caught up in sexual misconduct allegations. Including “CBS This Morning” competitor Charlie Rose and political reporter Mark Halperin. They were both fired over it. The Hollywood sex trials have now spread into the media and politics. It’s shaping up to be a bloodbath. Lauer, who is reportedly paid around $25 million a year to helm the NBC morning show, is arguably the biggest television news star yet to fall.

He co-anchored “Today” for two decades, conducting interviews with U.S. presidents, world leaders and major cultural figures. Lauer was a media icon. He traveled across the globe reporting for the show, in recurring segments like “Where in the World is Matt Lauer.” His face was a mainstay on network events, such as the Olympics and Macy’s Thanksgiving Day Parade. He has interviewed four sitting presidents during his career.

Matt Lauer has been terminated from NBC News. On Monday night, we received a detailed complaint from a colleague about inappropriate sexual behavior in the workplace by Matt Lauer. As a result, we’ve decided to terminate his employment. pic.twitter.com/1A3UAZpvPb[2]

His abrupt dismissal shows how the media will eagerly ax their own just on the word of one alleged victim. I’m pretty sure he’s guilty here, but shouldn’t the guy get the benefit of the doubt until the allegations are proven? Whatever happened to innocent until proven guilty? “Our highest priority is to create a workplace environment where everyone feels safe and protected,” Lack told staff, “and to ensure that any actions that run counter to our core values are met with consequences, no matter who the offender.”

President Trump tweeted on Lauer’s downfall this morning: “Wow, Matt Lauer was just fired from NBC for ‘inappropriate sexual behavior in the workplace. But when will the top executives at NBC & Comcast be fired for putting out so much Fake News. Check out Andy Lack’s past!” That didn’t take long. He later followed that up by writing: “So now that Matt Lauer is gone when will the Fake News practitioners at NBC be terminating the contract of Phil Griffin? And will they terminate low ratings Joe Scarborough based on the “unsolved mystery” that took place in Florida years ago? Investigate!”

The incident that was reported by a colleague is alleged to have happened in 2016 at the Rio Olympics. The unnamed woman is claiming that Lauer sexually assaulted her. Lauer and his wife Annette have three children – Jack, Romy and Thijs – who live in East Hampton with their mother while their dad is in NYC during the week. He’s been married for 20 years. This will destroy his life and family. What a sad ending to a long career.