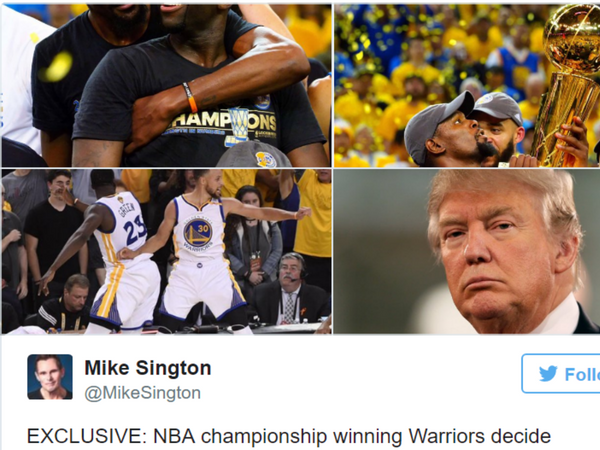 The Golden State Warriors beat the Cleveland Cavaliers in the NBA finals on Monday and yesterday Twitter exploded with the fake news that the Warriors would be skipping the traditional White House visit, despite no basis in fact.

On the media side, a CNBC reporter was the first to post the “news.”

In an archived version of the tweet[2] from the early hours of June 13th (now deleted), posted to the @ReformedBroker[3] account, run by Josh Brown of CNBC’s The Halftime Report, stated:

At the time it was archived, it had over 23,000 retweets and 38,000 likes. When questioned by a Twitter user about the source, he replied:

Just repeated a few other verified users on twitter who had said it early this morning. I have no idea if its true, hence “per reports.”

Oh, so an unverified report of an unverified report, which only has traction because the blue checkmark brigade on Twitter all agree it’s true. He then pointed his finger at Mike Sington[4], whose Twitter profile calls him the “World’s Top Celebrity Expert,” who posted the bogus story without any facts to back it up.

Whether a story is true or not doesn’t matter nearly as much as people who want the story to be true. And in this world, you’re more likely to have a fake story make the rounds and be believed because it takes so long for the truth to put on its boots and get out the door.

Shaun King, a social justice warrior and a white man who pretends to be black, tweeted:

It took some time for the correct information to get online, when Jeff Zillgitt[8], the NBA reporter for USA TODAY Sports posted this:

In fact, the Warriors had to release a statement to clear up the issue, saying[10]:

The Golden State Warriors say they have not yet been invited to the White House for the visit that honors sports champions.

“Today is about celebrating our championship. We have not received an invitation to the White House, but will make those decisions, when and if necessary,” the team said in a statement.

The statement also concedes that the head coach for the Warriors, Steve Kerr, has referred to Trump as a “blowhard” who is “ill-suited for presidency.” Too bad the rest of the country disagreed with you on that, Steve.