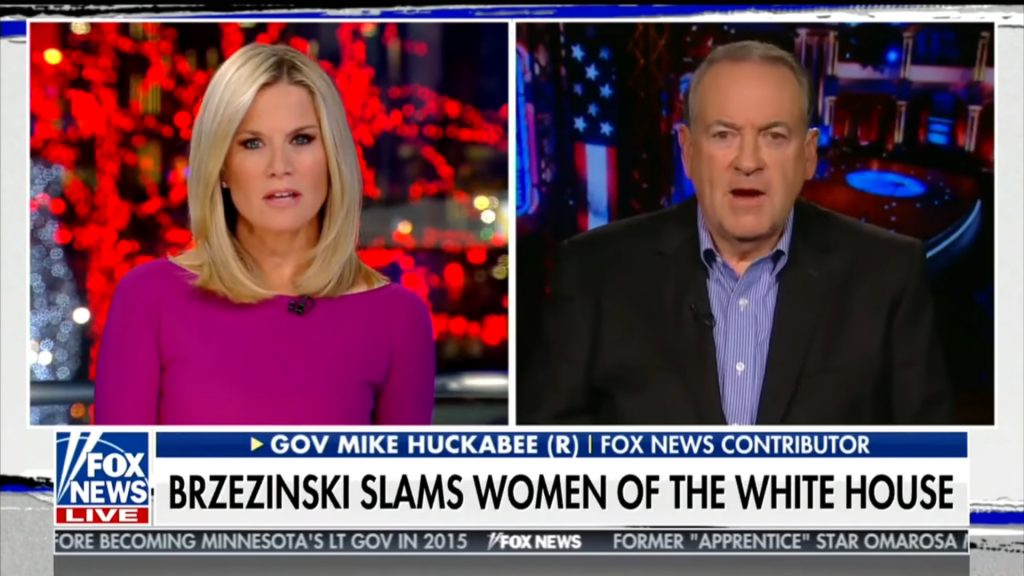 If you wonder where Sarah Huckabee Sanders gets her no nonsense attitude from, it’s worth starting to look at her father Governor Mike Huckabee.

Speaking to Martha MacCallum on Fox News last night, the Gov described what had happened earlier on the Morning Joe show, where Mika Brzezinski insulted his daughter, the White House Press Secretary.

Huckabee said of his 35 year-old daughter:

“She deserves better from other women and it just amazes me that even the women who say they are feminists are doing everything they can to discredit my daughter. [Sarah] stands strong and tough and walks into that lions den of a press room every day and represents women and represents the president and represents strength in an incredible way.”

Mika’s beef started when Sarah Huckabee Sanders discounted a CNN reporter, April Ryan, who suggested that Trump had tweeted something sexually inappropriate[2] about Senator Kirsten Gillibrand, and Sarah said that the tweet in question could only be considered innuendo if your mind is in the gutter. Trump suggested that Gillibrand was “begging” for campaign donations, which was intentionally misinterpreted by the outrage brigade to mean something grosser. Sarah went on to point out that Trump has used that same wording to speak about men, too, from both parties. So no, it’s not inappropriate, and no, there will be no apologies.

“Sarah Huckabee Sanders, I feel sorry for you. I started a hashtag ‘Support for Sarah’ and ‘get your mind out of the gutter’ in your quest for truth, in quest for goodness, in your quest for love country, because you haven’t made it there yet.”

Mika also complained that all of the women in the White House should be pitied because none of them responded to the tweets the way that Mika felt that they should have.

Earlier this week, Sarah went after Barack Obama, who gave a speech claiming that he is the one responsible for any current economic growth. He credited his administration’s “efforts to fight climate change” for the “better economy,” saying that the actions he took in that climate change battle saw “the US economy grow consistently.” What, did he mean that boondoggle Solyndra, the solar panel company that received a $535 million dollar loan from Barack’s feds along with millions in tax breaks from California before declaring bankruptcy? They promised thousands in jobs, but just ended up closing their doors. Sarah responded to Obama’s claims by quoting stats on the jobless rates, saying that you have to agree that the “economy is better under President Trump[3].”

Here’s the video of the Governor speaking on Fox News with Martha: