No Air Time For Radicals: Fox Will No Longer Air National Anthem

In a controversial move, Fox will no longer air the National Anthem before NFL games. This could be seen as refusing to give kneeling football players airtime and bring their “protests” to millions of people in the audience. To the more cynical, it could be seen as Fox’s way of trying to encourage people to continue watching the game, so the loss of viewership doesn’t hurt their bottom line.

In any case, they have made the decision and are sticking with it. 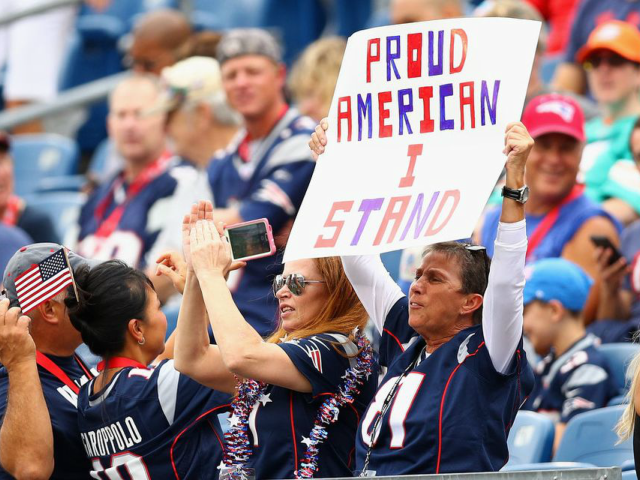 The NFL has seen a dramatic drop in ratings, ticket sales and revenue as a result of allowing their players to kneel during the National Anthem. As a result, Fox Sports is trying to engage in damage control on their end. They have no actual control over whether the players kneel or stand, but they are now refusing to air the National Anthem and the resulting “protests.”

Fox Sports President Eric Shanks released a comment on the decision, stating that the company is going to go back to the practice of not airing the National Anthem during the game.

“The standard procedure is not to show them because of the way the commercial format works and the timing of the anthem to get to the kickoff,” he said. “So I think we’re going to pay attention to events.”

“Who knows what’s going to happen?” Shanks continued. “A lot of time is happening between now and then. But I think the plan would be to get back to a normal schedule. I think that’s where we sit today on a Tuesday.”

Liberals like Matt Yoder from Awful Announcing were predictably upset with the move, saying that the NFL is in a “culture war” with the President.

“[I]t’s impossible to go back to a normal schedule now when the NFL and its athletes are in the middle of a culture war with the sitting President of the United States,” he said. “The anthem will be a huge story this week and likely will be throughout the remainder of the season as well.”

So, the protests will still be happening, but Fox is going to choose not to air them. Whether this is a good thing or not depends on how you look at this entire situation, but at least they’re trying to do SOMETHING rather than just complaining that nobody is watching them and making no effort to change.

If nothing else, you have to respect that they are not showing the radicals and giving their protests an audience.