NY Times Publishes Mosaic Of Pope “Made Out of 17,000 Non-Lubricated Condoms”

Now, that’s offensive[1]. So, because Pope Benedict had an opinion on condoms this imbecile didn’t like, she decided what really needed doing was to make an insulting portrait of the Pontiff out of rainbow colored condoms. They keep saying they are non-lubricated like that makes it better somehow. Keeping it classy in the art world as usual. But don’t you dare draw the Prophet Mohammed! That’s blasphemous don’t ya know. No wonder donors and supporters of the museum are jumping ship – wonder how many subscribers the New York Times lost for publishing this sacrilegious piece of crap? Let’s see… they had maybe five subscribers left… so, I figure, they are down to about two now. Evidently you can be right or smart in this case and the old gray lady chose ‘right.’ Moronic and insulting – a twofer. 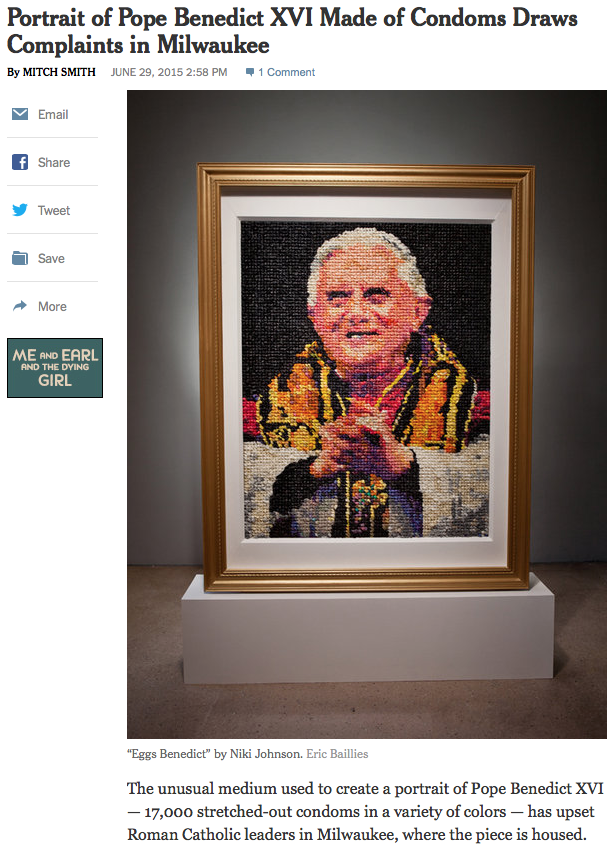 (CNSNews.com[4]) — The Milwaukee Art Museum is getting complaints from the Milwaukee archbishop, members of the public, and even some of its donors over its plans to display a huge portrait of Pope emeritus Benedict XVI.

“This piece is made out of 17,000 nonlubricated condoms,” artist Niki Johnson recently told WITI television in Milwaukee. “What I did was inter-stuffed them and folded them in order to create this tonal range.”

The portrait, titled “Eggs Benedict,” measures almost seven feet high and five feet wide, and it can be viewed from both the front and the back: “When you come to the back, you see the condoms themselves,” Johnson noted.

Johnson told the WITI she decided to make the latex mosaic after Pope Benedict’s visit to Africa in 2009. Benedict said condoms would not resolve the AIDS epidemic: “On the contrary, it increases the problem,” he said at the time.

“And I was just dumbfounded,” Johnson said. “I mean, I couldn’t make any sense of that statement. And so I figured I needed to do something.”

Milwaukee Archbishop Jerome Listecki says the museum’s decision to display the piece is insulting and callous, the Associated Press reported. Some patrons have dropped their membership, and at least one donor has ended financial support of the not-for-profit museum.

“This was never intended to be derisive, mocking or disrespectful of the pope,” the Milwaukee Journal Sentinel quoted museum Board of Trustees President Don Layden as saying. “It was to have a conversation about AIDS and AIDS education. And my hope is when the piece appears in the museum that will be the focus of the discussion.” May I just say that Mr. Layden is an idiot. He damn well knew it was disrespectful and derisive. He also knew that this wouldn’t further the cause to help AIDS education – he was hoping for publicity and notoriety. Unfortunately, he got them both in a bad way. Since membership for that museum is their primary source of revenue, they are in big doo-doo. Just like the subscription income for the New York Times, which was already nose-diving, so I guess they figured they’d commit suicide faster by offending every Catholic out there. Boy, there are some brain trusts at the New York Times, aren’t there? You boys chose poorly.