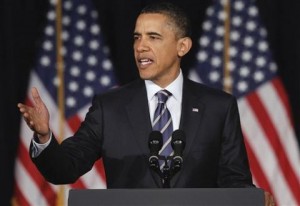 While Obama bashes Romney and Bain Capital, frivolously[2], for outsourcing, he gladly takes their money. : As Ben Shapiro reported in Breitbart on July 13[3]: that Obama has received quite a bit of money from these “pioneers” in outsourcing with people like:

Joshua Bekenstein. Bekenstein has been a managing director of Bain Capital since 1986. In 2008, he signed Barack Obama a $4,600 check. In 2004, he gave a $50,000 donation to the Democratic National Committee. That’s outsourcing money, plain and simple. And Obama was happy to take it.

Furthermore, there’s Jonathan Lavine who should have been front and center in the media after the release of the first Bain ads. : As Robert Costa reported[4] back in May from a column by Katrina Trinko[5]:

Mitt Romney left Bain Capital in 1999 to manage the Winter Olympics, two years before GST Steel declared bankruptcy. But that hasn’t stopped President Obama from blaming him for the company’s 2001 collapse. In a new Obama campaign: video[6], ex-steel workers criticize Romney for being “out of touch” with the “average working person.” Left unmentioned (and blameless) is: Jonathan Lavine[7].

Lavine,: according to the: Los Angeles Times[8], is a top Obama bundler and a managing director at Bain Capital. Lavine, who has raised over $100,000 for the president, was at the firm when GST Steel declared bankruptcy. So according to the Obama team’s logic, Romney, who had left Bain, is responsible for GST Steel’s demise, but Lavine, who was there, is not? Expect to hear more about this connection.

Yeah, not the least hypocritical.