When Marie Harf proved too risibly asinine to serve as a spokesmoonbat for the State Department, she was kicked upstairs to become a senior advisor to Hanoi John Kerry, specializing in helping Iran to acquire nuclear weapons. Given the tendency for idiots to fail upward in Washington, it was once facetiously predicted that she would be appointed Commander of the Atlantic Fleet. Instead, she has washed up on the beach at Fox News…

Which is odd because in 2015 she was in the hot seat with reporters grilling her on Hillary Clinton‘s email scandal and the State Department’s handling of 55,000 pages of the former candidate’s records.

When asked about Clinton telling staffers to use a secure server, “I think everyone can read it at FoxNews.com if they’d like to,” Harf told them this with “dripping sarcasm.”

A former State Department Spokeswoman, Harf will be a contributor to the network.

It is likely that Ms. Barf will again be subjected to the derisive laughter she became so familiar with at the State Department. No worries; she has a defense for that: blaming sexism.

No matter how bad Barf bombs at Fox News, she will always have a place in our hearts — and in our dictionaries: 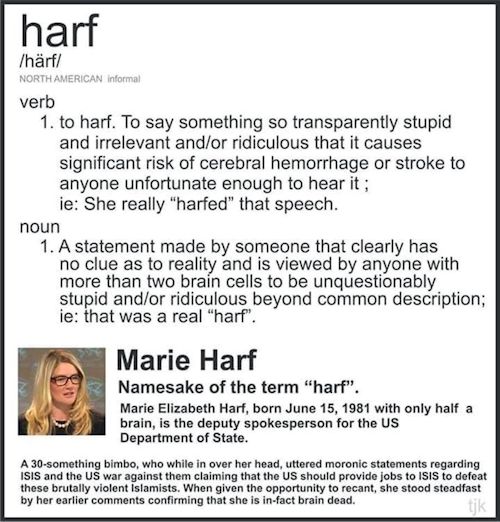 On tips from J and Rob E. Cross-posted at Moonbattery.