Over 25,000 Sign Petition to Have Megyn Kelly Booted From Future GOP Debates

Yep, my name is on that petition[1]. I sent it out over the weekend and fully support it. Megyn Kelly should never host another Fox News debate after her disgraceful conduct at the first Republican debate last week. That wasn’t a debate, it was a badly written reality show. It was Fight Club for politicians. Kelly set them at each other’s throats and goaded them. She asked loaded, misleading questions and smeared Donald Trump every chance she got. That’s not why I watch a debate. I watch it for the issues at hand and to see how the candidates answer and handle those issues. If I wanted to watch Celebrity Politician, I would have gone somewhere else. Fox Fail. Rush Limbaugh and Mark Levin have criticized Fox over the debate, saying it was a hit job and an effort to take Trump out. It was. What’s telling is that a large portion of the Fox audience, at least according to Twitter and Facebook, is also unhappy. They are going to lose viewership over this screw up, as they should. Fair and balanced my arse. 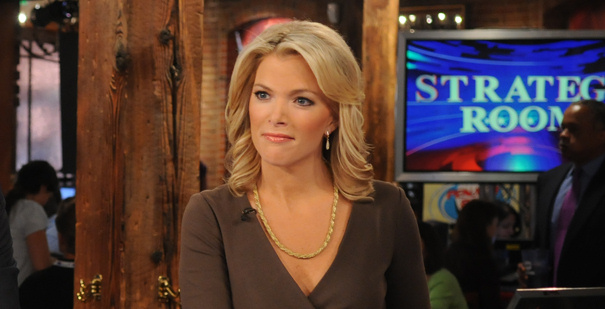 Twitter exploded with attacks on Kelly and FOX News for the constant attacks on the Republican candidates.
Here is just one example:

On Friday an online petition[5] was set up to bar Megyn Kelly from future GOP debates. 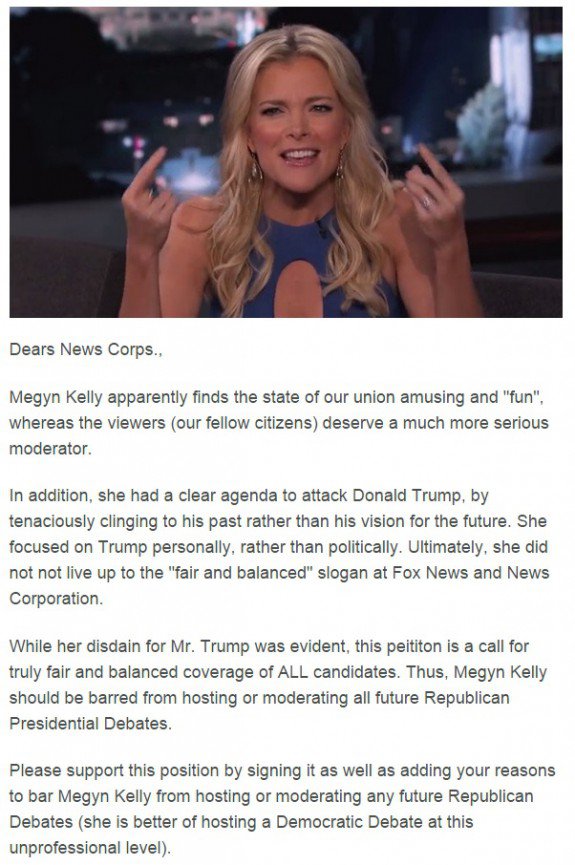 By Sunday morning over 28,000 people have signed the petition.

Over 25,000 people took the time to write their name, address and email on the petition to remove Kelly from future GOP debates.

This should send a clear message to FOX News.

“The only reason Fox had high ratings was because of TRUMP and he’s the very one they tried to tear down. Thanks for Trump for your ratings, it sure wasn’t the so-called journalists,” one person said. Regardless of what the so-called journalists and talking heads say out there, that debate was not cutting edge or fair by any stretch of the imagination. When Trump was asked if he would go third party, he told the truth. For that, he got ankle bit by Rand Paul right on cue, almost as if it was scripted. That was allowed to go on briefly. Trump didn’t back down or waiver on the issue. To be honest, none of the candidates got enough time as far as I was concerned. No one should have been told to address another candidate – they should have been able to answer concerning topics that were addressed to them. A full half hour of the event was the moderators blabbing and looking self-important. Then afterwards, Megyn Kelly’s ‘me show’ began on social media, where she detailed every little thing she was doing. Including Megyn Kelly saying right after the debate that she thinks a Democrat will win the presidency in 2016. That little comment seems to be disappearing from the web. How convenient. No wonder thousands signed that petition and no matter how Fox spins this, she’s now damaged goods. Conservatives were paying attention this time.