Lying, liars of the mainstream media…[1] what did you expect? I’m just surprised that it took 12 years for someone to out this braggart. Looks like the military guys finally had enough this week of Brian Williams’ tall tales and called him on it – publicly. Then Brian doubled down by claiming it was the ‘fog of memory.’ Right. You were so foggy, you got confused you were half an hour behind the chopper that did get hit and then you turned around. Sounds a lot like lying to me. 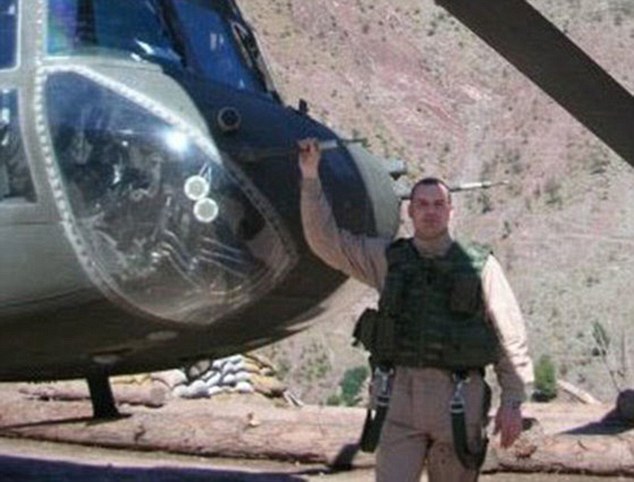 Pilot Allan Kelly, 44, (pictured) has revealed what really happened in Iraq, saying
the Chinook did not come under fire at any time during the mission and that he and Williams
passed the time talking about cars. 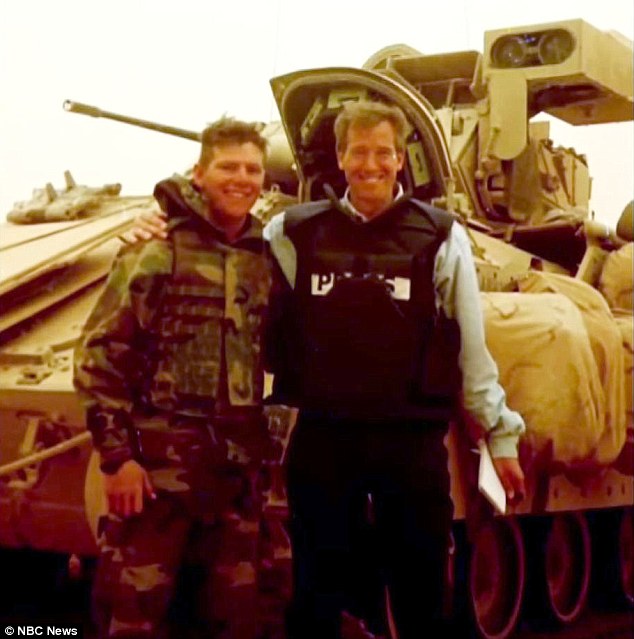 Williams, pictured above covering Iraq, was called out by veterans on an overblown
story of being aboard a helicopter hit by an RPG – which it emerged he was not on at all.

One of the three pilots on board a helicopter Brian Williams falsely claimed to have been travelling on when it was gunned down Iraq has given his version of the three days he spent with the millionaire NBC news anchor.

Williams, anchor and Managing Editor of the flagship Nightly News show, had been under fire for 11 days after being called out on the overblown story by indignant veterans of the 2003 invasion.

Bosses at the network finally suspended Williams without pay for six months acted after deciding his own decision to remove himself from anchoring for ‘several days’ over the ‘completely inappropriate’ claim was not enough.

Now Army pilot and father of four Allan Kelly, 44, has revealed what really happened on board the Chinook aircraft, saying the aircraft did not come under fire at any time during the completely routine mission and that he and Williams passed the time complaining about their cars.

Kelly said he is reluctant to join those lambasting Williams for his version of events, but told Minnesota’s StarTribune[2] that he just wants the truth to be revealed.

Williams’ story of being on board a Chinook helicopter during the 2003 Iraq invasion has reportedly changed over the years, but on January 30 he repeated the often-told version about the aircraft being hit by gun and rocket fire and being forced to make an emergency landing.

The pilot, Williams claimed, was later given a Purple Heart – a medal awarded by the U.S. military for those injured or killed while serving.

Kelly says that at no point did the helicopter take fire and said he was not awarded a Purple Heart.

Instead he says that during the mission a call came over the radio saying a Chinook helicopter that left the base in Kuwait 30 minutes before Kelly’s aircraft had been hit by bullets and a rocket-propelled grenade, and that the pilot of that helicopter had landed the aircraft safely.

News of that attack had forced Kelly and another Chinook pilot to turn their aircraft around in the middle of a sandstorm, which took between 15 minutes and half an hour, but he said nobody was hurt – even though the fear of attack and the reduced visibility made it a ‘pretty big emotional event’.

Now, everyone wonders just how many other stories that Williams has told are ‘exaggerated.’ Stick a fork in one scum bag, millionaire journalist… he’s done. Oh sure, he may come back in a supportive role at some time in the future, but he will never be in the limelight again. Time to retire, Brian. For all our sakes. I just have to wonder though, why is Williams being barbecued when they let the likes of Barack Obama and Hillary Clinton skate? It must be that the lying elite even have a stratum of untouchables. Perhaps Brian’s sin was forgetting he wasn’t as royal as he perceived himself to be[3]. 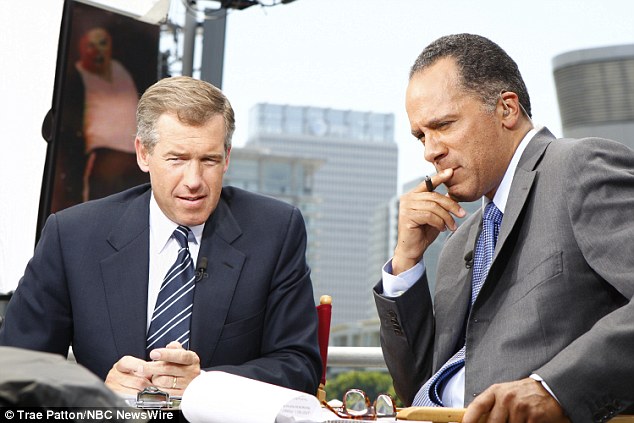 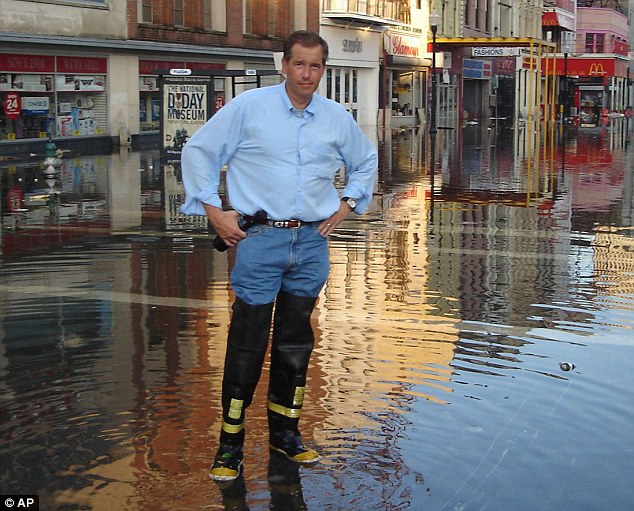 Dead body? Another Williams anecdote – of seeing a dead body float down a street
in New Orleans’s French Quarter during Hurricane Katrina, has now also been called into question. 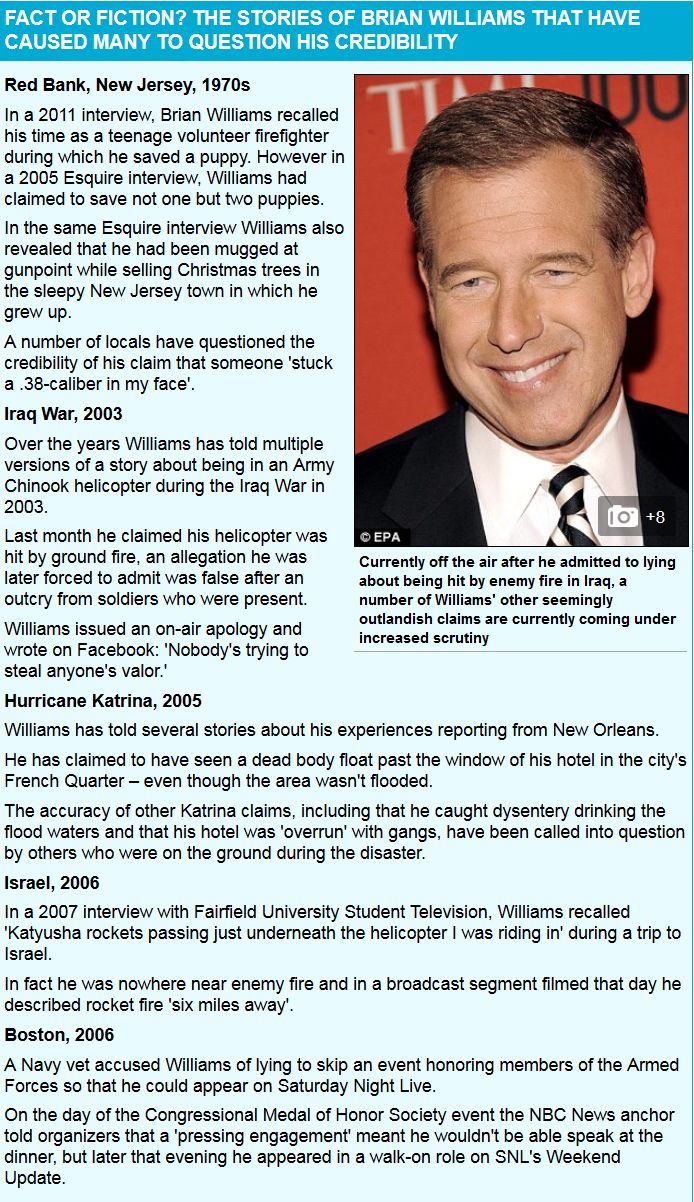